Speaking of Edie, as I was last week, I thought it might be instructive to see what the bookshelves of the two-year-old daughter of an inveterate book collector look like. A bit like this, in fact: 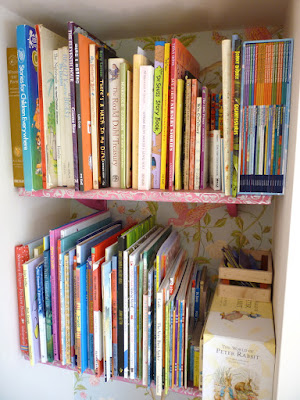 Those are the shelves in the alcove in Edie's bedroom. Quite a lot of books crammed in there; mostly picture books; mostly, but not exclusively, foraged from the charity shops of Lewes and, occasionally, Brighton. Favourites – both Edie's and mine and Rachel's – among that little lot include Jennifer Uman and Valerio Vidali's Jemmy Button (subtitle The Boy That Darwin Returned Home, Templar, 2013); Heapy & Heap's Very Little Red Riding Hood (David Fickling, 2013); Helen Ward's Wonderful Life (Templar, 2007); and Jason Hook and Ilaria Demonti's Wendy and the Wallpaper Cat (V&A, 2015; more on that one soon). Also firm favourites with Edie are Tony Millionaire's Little and Large (2005) and That Darn Yarn (both Dark Horse, 2005), which are on the top shelf; those actually come from my collection of Millionaire's various Sock Money works, but after reading them to Edie it became evident they really belonged on her shelves, and now she asks for "Sock Monkey" on a regular basis. 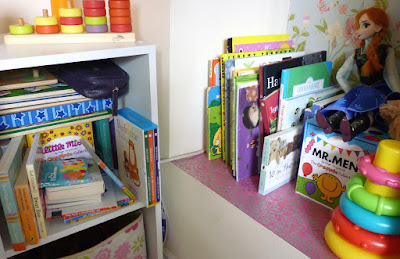 At the bottom of the alcove are more books, and yet more in a little bookcase next to it. Favourites among that lot include the Little Miss and Mr. Men box sets (the latter with Anna out of Frozen sitting atop it) and Judith Kerr's Bedtime Tales set, especially The Tiger Who Came to Tea and Mog the Forgetful Cat. And there are other entries in the Mog series scattered throughout Edie's book collection, including here: 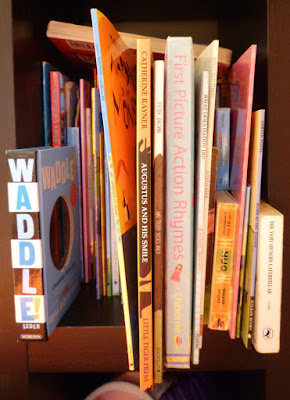 A shelving unit downstairs in the lounge which originally housed some of my records but now houses rather fewer of my records and rather more of Edie's books and toys. Still, I only have myself to blame there...
Posted by Nick Jones (Louis XIV, the Sun King) at 07:45