Early in 2010, when my secondhand book collecting – an interest which had only really been kindled the year before – was gathering pace and Existential Ennui was drifting towards its eventual destination as – and stop me if you've heard this one before – an increasingly circumlocutory chronicle of what has since become, let's be frank, a flaming obsession, I decided to finally try The Hunter, the first novel in Richard Stark's twenty-four book series starring taciturn heister Parker. I'd been thinking about it for a while before that, having long been an admirer of John Boorman's 1967 film adaptation of The Hunter, Point Blank; indeed it was in the British Coronet movie tie-in paperback edition – a slightly scruffy copy since replaced with a rather nicer one – that I eventually read The Hunter – retitled, accordingly, as Point Blank.

It was lust at first sight: stripped-back, brutally efficient prose; a cold-hearted protagonist as fascinating in his own way as another fictional career criminal I'd previously fallen for (Tom Ripley, of Patricia Highsmith's Ripliad); and a structure whose seeming simplicity belied the clever tricks played by the narrative. In short order I bought and read a Coronet paperback of the next book in the series, The Man with the Getaway Face (or The Steel Hit as it was titled by Coronet), then a US Berkley paperback of the third Parker, The Outfit, and I was off to the races: like so many before me I had embarked on my own personal Parker odyssey. (Somewhere during that first flurry of books I learned that "Richard Stark" was a pen name, just one of many employed by Donald E. Westlake, thus instigating a larger, parallel odyssey... but that's another story.) 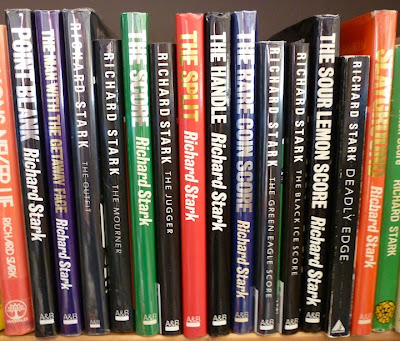 At that stage I wasn't giving much thought to how I was collecting the Parkers; I just knew I wanted to read them, preferably in cheap, vintage paperback editions (which, given that they were mostly out of print in the UK at that point, was how they were largely available). Then I encountered Allison & Busby's hardback editions of the Parkers, issued in the UK in the 1980s. I think I first saw a copy of the 1984 A&B edition of Point Blank, with its black, foil-embossed bullet-holes dust jacket (designed, like the bulk of the A&B Parker jackets, by Mick Keates), on the shelves of the late lamented Nigel Williams Rare Books on London's Cecil Court – priced out of my range, naturally (I rarely ever actually bought anything from Nigel Williams, much as I loved the place).

My book collecting inclinations were increasingly leaning towards modern firsts, and consequently my curiosity was piqued: though the A&B Parkers weren't, strictly speaking, the first editions of the novels – for the sixteen Parkers in the original 1962-1974 run of the series that honour belonged to American publishers Pocket Books and Gold Medal in the '60s and Random House in the '70s – they were the first hardback editions (in most cases; Slayground was published straight to hardback by Random House, and I later discovered that another three of the Parkers A&B published were first issued as hardbacks by Gold Lion in 1973). 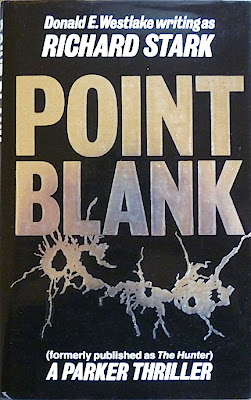 Here, then, was an interesting way for me to collect the bulk of the Parker series, one which I readily – perhaps foolhardily, given how pricey some of them were – embraced. I secured a relatively inexpensive copy of Allison & Busby's edition of Point Blank, and over the next six months managed to track down the majority of the remainder of the thirteen Parkers A&B issued in hardback (A&B did publish a fourteenth title, Deadly Edge, but only in paperback), chronicling the quest on Existential Ennui as I did so.

And then my mission stalled: two of the Allison & Busby Parkers proved highly elusive, partly due to scarcity, partly to prohibitive prices. One of those, the 1986 hardback of the sixth Parker, The Jugger, I eventually managed to nab in 2011, leaving me with just one last Allison & Busby hardback to find at an affordable price. Which brings me, in my usual long-winded manner, to the point of this post: 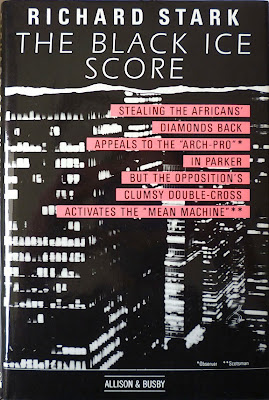 That there is the first (and only) hardback edition of Richard Stark's The Black Ice Score, Parker #11, published by Allison & Busby in 1986 under a Mick Keates-designed dust jacket and won by me on eBay last month. The irony here is that the Parker that took me the longest time to acquire in hardback (I bought an Allison & Busby paperback in 2010 as a stopgap) is the one that I probably like the least – but that's by the by; what matters is what it represents: the last piece of a collection that has taken me over three years to complete. 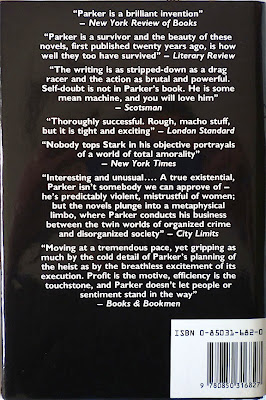 Which leaves me with an odd mixture of feelings. There's a sense of accomplishment, sure, but also a little sadness (in every meaning of the word, heading any quips off at the pass). Trying to find all of the Allison & Busby hardback Parkers has been a constant in my book collecting, not to mention my blogging about that book collecting – the one feeding the other. My crazed quest to collect all of the A&B editions helped to build Existential Ennui's (admittedly still slender) readership: I know there are some folk who began following the blog as a direct result of that quest. (Some of them have even stuck around, poor buggers.) I guess reaching the end of a journey – to use X Factor parlance – any journey, however minor and inconsequential it may be in the grander scheme of things, can be a bittersweet experience: arriving at a destination only to realise it was the getting there that was the thing. 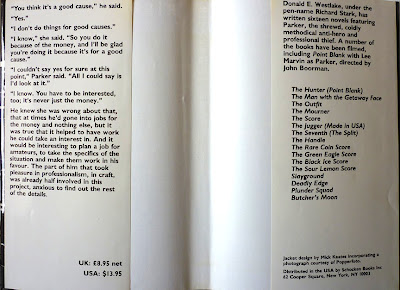 Mind you, that phase of my Parker collecting might be done, but I expect I'll still be picking up intriguing editions of the Parkers as and when I see them; after all, these days, in a way as a consequence of the Allison & Busby Parker collecting quest, I have to have a ready supply of material for the Violent World of Parker blog as well as for Existential Ennui. And though my hardback Richard Stark shelf is a handsome thing to behold:

There are still a few hardback Parkers I'd like to get my clammy mitts on (and doubtless there are other, non-Parker Westlake Scores still to be had). So I suppose in a wider sense it's not really the end at all. The quest – and the chronicle – continues...
Posted by Nick Jones (Louis XIV, the Sun King) at 06:00