Fletch by Gregory Mcdonald (Gollancz, 1976): the Original Novel, Basis for the 1985 Movie 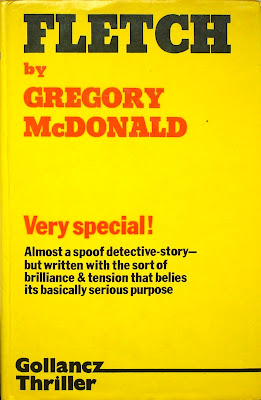 First published in hardback in the UK by Gollancz in 1976 – two years after the US Bobbs-Merrill edition – Fletch was American journalist-turned-author Gregory Mcdonald's second novel, following 1964's Running Scared. It was also the first in what would become an eleven-book mystery series, one which would hop back and forth across the life of both its title character, investigative reporter I. M. Fletcher, and latterly his son, and would also spin off another four-book series featuring police inspector Flynn. But more pertinently from the perspective of this 'ere series of posts, in 1985 Fletch was turned into a film, starring Chevy Chase as the eponymous lead. 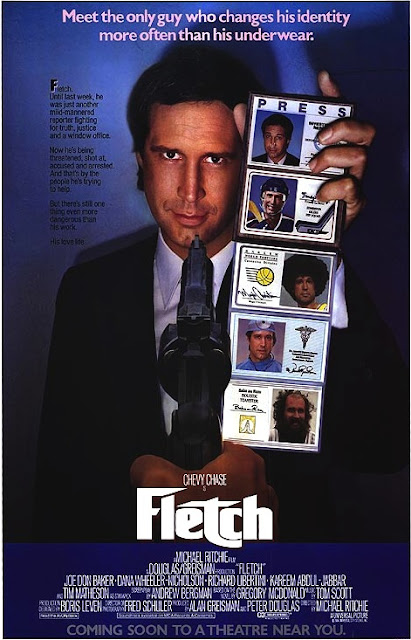 Now, let me just state for the record here that I'm a huge fan of Michael Ritchie's movie (which was scripted by Andrew Bergman, who also wrote Blazing Saddles). I rarely miss an opportunity to respond to a "thank you" or, even better, a "muchas gracias" with "Tierra del Fuego", or reply to enquiries as to what I do for a living with "I'm a shepherd". But as eminently quotable and gloriously silly as Fletch the movie is – and even though it was my gateway to Mcdonald's series (which, courtesy of Beckenham Library, I made my way through during the 1980s, although I don't believe I ever read the "son of Fletch" books) – the original novel still, I think, stands as the superior work. 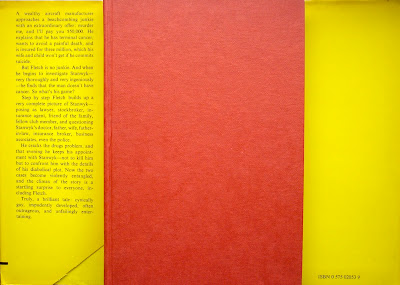 A big part of the reason for that is Mcdonald's narrative approach. Fletch – all the Fletch novels, in fact – is very dialogue-heavy, with little in the way of description. Chapters typically begin with a conversation and progress from there, Mcdonald filling in the gaps where necessary. But where, say, George V. Higgins's similarly dialogue-heavy prose, with its long speeches posing as conversations, can become wearying (or at least, can for me), Mcdonald keeps it light and snappy, the back-and-forth banter between Fletch and the various players a joy to read.

Of course, Chevy Chase brought his own unique voice to Fletch – the character and film – dropping in ad-libs and generally arsing about. Even here, though, many of his quips and one-liners have their basis in the book – Fletch introducing himself to someone as "John Zalumarinero", or engaging with a police chief thus:

Alone in the chief's bare, utilitarian office, they sat on either side of a gray aluminum desk.

"By any chance, could Fletch be short for Fletcher?"

"Is Fletcher your first name or your last?"

"I forget the address. Where your goons picked me up this morning."

"Weekends I spend in Hawaii."

"Do you live alone?"

"Except for a pet roach."

Meanwhile the screenplay progresses along essentially the same lines as the book – Fletch is hired by wealthy businessman Alan Stanwyk to murder Stanwyk, a proposition which eventually becomes entwined with Fletch's investigation into the LA beach drugs scene – which is more than can be said for the 1989 sequel to the movie, Fletch Lives, again directed by Ritchie, but bearing little relation to Mcdonald's novels. Mind you, Fletch Lives, while nowhere near as good as the first film – and certainly not the equal of the books – has its own share of daffy dialogue. ("Take your pants off." "I don't even know your name." "Bend over." "Ben? Nice to meet you, Victor Hugo.") 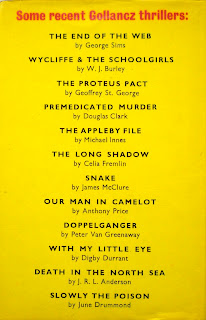 The Gollancz edition of Fletch has become fairly uncommon in first: AbeBooks has just two copies listed at present, one of them ex-library (ignore the listings for Confess, Fletch, the first sequel, which has been mistakenly listed as being published in 1976 by a few sellers; it was actually published by Gollancz in 1977) – rather less than the Bobbs-Merrill first, of which there are over twenty copies currently available.

I'm planning on returning to Mcdonald and his Fletch series down the line – when I'll probably get into what a minefield collecting the novels in Gollancz first editions is – but next in this series of posts: a terrific 1972 thriller in the Geoffrey Household mould, one which begat an incredibly successful film franchise, and whose (anti-)hero would wind up as an entry in the Oxford English Dictionary...
Posted by Nick Jones (Louis XIV, the Sun King) at 06:30