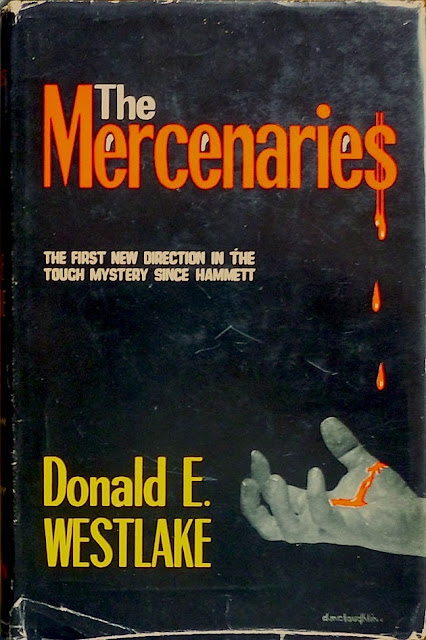 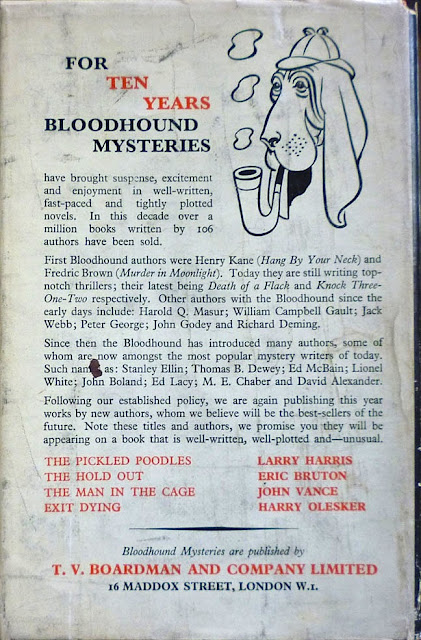 This is the UK hardback first edition of Donald E. Westlake's The Mercenaries, published by T.V. Boardman as part of their American Bloodhound Mystery line (no. 347 in that line, to be precise) in 1961 – the year following the US Random House first edition – and it is a very rare thing indeed. I've only ever seen a couple of copies of this edition for sale online, neither of them possessing a dustjacket; to give you an idea of how short the supply of the Boardman edition of The Mercenaries is, there are currently zero copies of the Boardman first on AbeBooks.

There are a couple of reasons for the book's scarcity. The most obvious is that The Mercenaries was Westlake's debut novel – at least under his own name; he'd had a number of pseudonymous sleaze efforts published by this point – and is therefore much in demand in first, US or UK. But the Boardman edition of The Mercenaries is additionally collectible for a whole other reason: Denis McLoughlin. McLoughlin was the art director at Boardman (not to mention an accomplished comics artist), producing around 600 covers for the publisher's crime novel list, and his work, with its bold use of chiaroscuro/restricted palette/occasional collage elements, is highly sought after – I posted a gallery of his Westlake covers in 2010 (now updated with The Mercenaries). So that, combined with it being Westlake's first novel, is probably why the Boardman first of The Mercenaries is so elusive.

My copy was a Christmas present from my sister, who I pestered into buying the only Boardman copy on AbeBooks, which was being offered for sale by Wessel & Lieberman Booksellers of Seattle. But I didn't covet it simply because it's the UK first edition (although that would surely be reason enough); there was something even more special about this particular copy: 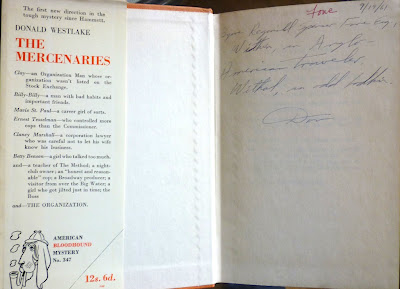 It's signed and inscribed by Westlake on the front endpaper, and dated in the year of publication. And if we take a closer look at the inscription: 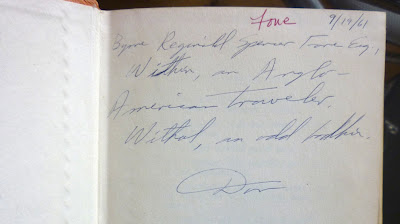 Within, an Anglo-American Traveler,

Without, an odd bodkin.

Wessel & Lieberman were a little unsure as to whether the inscription was actually by Westlake, but I asked my sister to take a punt on the book anyway (thank you, Alison), and once I had it in my sweaty palms, I compared the dedication to other Westlake signed books I own (see here and here). And I'm as certain as I can be that the inscription is the genuine article.

But who was/is Byrne Reginald Spencer Fone (who's also signed the endpaper – or rather jotted an ownership name on it)? Well, Fone is – I believe he's still with us – also a writer. He's perhaps best known for penning a number of gay and lesbian studies – Homophobia: A History; A Road to Stonewall – as well as a string of literary studies and, most recently, a number of novels, including American Revolution, "a political crime novel about a gay American president", according to Amazon. As to Fone's connection to Westlake, though, I'm afraid I'm in the dark there. Fone did teach at New York University in the early 1960s, so it's possible he taught Westlake. Then again, they could simply have been friends and contemporaries; as ever, if anyone can shed any light, do leave a comment. 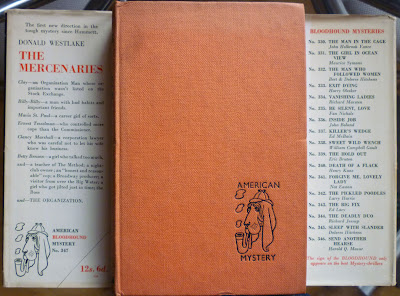 Westlake was evidently proud of The Mercenaries – he sent inscribed copies of both the UK and US editions to a number of his friends and associates – and justifiably so: it's a solid debut, and a convincing portrayal of New York's criminal underworld. Certainly Hard Case Crime thought highly enough of it to reissue it a few years back, retitled as The Cutie. So for my next Violent World of Parker cross-post, I'll be reviewing the novel – something Violent World of Parker proprietor Trent's already done, of course, but you never know: I might find a new angle or two.

Back here on Existential Ennui, however, it's competition time – at least, for my American readers. Because tomorrow Tomas Alfredson's excellent movie adaptation of John le Carré's Tinker, Tailor, Soldier, Spy goes on general release in the US:


And to tie in with that, in a first for Existential Ennui, I'll be giving away two sets of movie swag, courtesy of the film's distributor, Focus Features. So join me again on Friday for an exclusive Tinker Tailor Soldier Spy competition!
Posted by Nick Jones (Louis XIV, the Sun King) at 05:11