From the Lewes Book Fair: A Perfect Spy by John le Carre

Looks like Espionage Week is stretching into the weekend after all, although not in quite the way I expected it to. Because today the Lewes Book Fair took place, and as a result I ended up with a small pile of books, all of which I'm quite pleased with, two of which fit right into Espionage Week. And the first of those... is this: 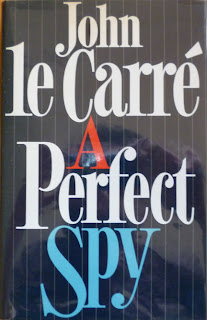 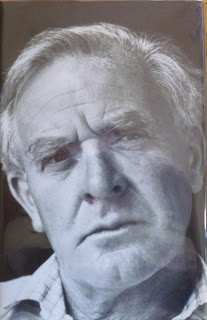 A UK hardback first edition of John le Carre's A Perfect Spy, published by Hodder & Stoughton in 1986, with a dustjacket design by typographer Howard J. Shaw (author photo on the back by Stephen Cornwell). Not exactly an uncommon book, but this copy is in fine, unclipped condition and was also bloody cheap. It's about the disappearance and possible defection of a secret agent, although I suspect there's a lot more to it than that; I texted Roly while I was at the Book Fair and he reckoned I'll enjoy it. It's certainly highly regarded by some, including Philip Roth.

I also saw a copy of The Little Drummer Girl, but that wasn't in as nice nick as A Perfect Spy, and also, judging by the jacket flap blurb, that one really did fall into Roly's eight point estimation of later Le Carre, so I gave it a miss. By then I'd already bought quite enough books anyway – about which, more soon...

One thing you sometimes find with second hand books bought from shops or book fairs is they occasionally come with little inserts. These can be the previous owner's bookmark, or a newspaper clipping – author obituaries are common – or just a random bit of jetsam. This copy of A Perfect Spy came with a holiday postcard hidden inside it, featuring the most orange beach scene I've ever, well, seen: 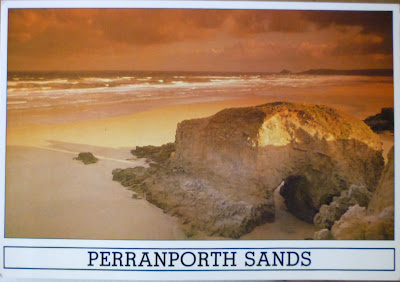 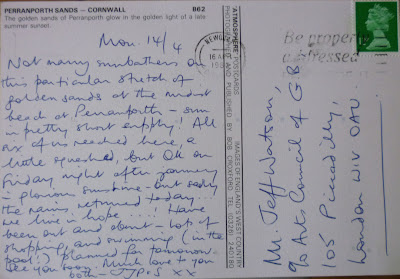 "Sun in pretty short supply," eh? Well that's what you get for going on holiday to the planet Mars.
Posted by Nick Jones (Louis XIV, the Sun King) at 11:08