It was back in March at the Lewes Book Fair, where I bought a first edition of Joe Haldeman's The Forever War, that I embarked on the science fiction book collecting odyssey which has proved such an enjoyable diversion over the past six months – for me if not for my illusory readership – and the Lewes Book Fair has continued to provide, with a bunch of cheap SF paperbacks at the May fair and a haul of cheap SF hardbacks – plus a couple more paperbacks – at the most recent one at the start of August.

Those hardbacks came courtesy of that book dealer's book dealer Jamie Sturgeon, who, knowing that I was on a science fiction kick, brought along what little SF he could find in his stock (he largely deals in crime fiction) – much of it space opera of one sort or another, which was just what I was looking for. He'd actually brought some SF to the previous Lewes Book Fair too, but that was for another collector – I know nothing about this person; for the sake of argument let's call them The Adversary – who was also keen on SF. On that occasion, by the time I got to Jamie's table whatever SF he'd had was gone – to be fair, he'd brought it along especially for The Adversary – but this time I was there early doors. I left one or two things for The Adversary, but I must admit I took the lion's share. Sorry, The Adversary, but as I'm sure you understand, when it comes to book collecting, you win some, you lose some.

And what I won – or rather purchased, for around a couple of quid each – on this occasion were: a first edition (ex-library but complete, with no pages removed) of Louis Charbonneau's Antic Earth (alias Down to Earth) (Herbert Jenkins, 1967), which I quite like the sound of despite its terrible online reviews; first editions of Ray Bradbury's short story collections The Day It Rained Forever (an ex-library – but again complete – 1962 second impression of the 1959 Hart-Davis edition), jacket by Joe Mugnaini, and Long After Midnight (1976 US Knopf), jacket typography by Ray Cruz, painting by Fuseli; a first hardback edition of Damon Knight's 1959 second novel A for Anything (alias The People Maker) (White Lion, 1974); a first of Hal Clement's second short story collection Small Changes (Robert Hale, 1969), jacket by Brian Netscher; a first of Robert Silverberg's short story collection Sundance and Other Science Fiction Stories (Abelard-Schuman, 1975); a first of Poul Anderson's Trader to the Stars (Gollancz, 1965); and a first of Keith Laumer's Bolo: The Annals of the Dinochrome Brigade (Millington, 1977), jacket by Lorie Epstein, photography by Graham Tucker.

I think I'm most pleased with the Anderson, which collects three of the author's Nicholas van Rijn stories – part of Anderson's wider Technic Civilisation future history – and which isn't terribly common in its Gollancz edition, and certainly not in this nice a condition; the Laumer, which is the first collection of the author's Bolo (futuristic tanks) military SF stories – the first of which, "The Night of the Trolls", I've read and rather enjoyed – and which is extremely scarce in this, its only British edition; and the Clement, which is another of those curious Hale SF books I've been picking up here and there. 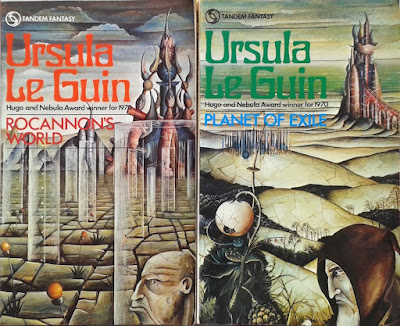 The two paperbacks came from another dealer at the Lewes Book Fair (possibly the guy who runs Ubu Books in Brighton's Open Market) and are the British first editions of Ursula Le Guin's first and second novels, Rocannon's World and Planet of Exile, both published in the UK by Tandem in 1972 (both originally published in the US by Ace in 1966). I'd planned on reading some of Le Guin's science fiction at some point, so coming across these editions of the first two novels in her Hainish Cycle, with their fantastically gothic Peter Goodfellow covers, was serendipitous. For me, anyway; less so for The Adversary. 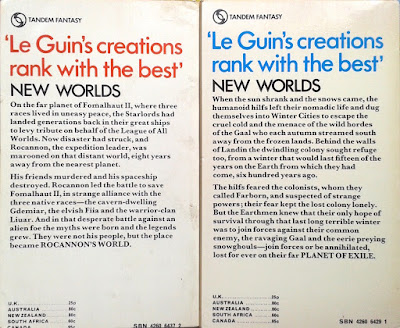