Presented as part of Espionage Week, I bagged this Lewes Book Bargain in the local Flea Market the other weekend: 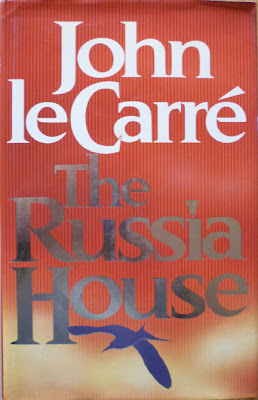 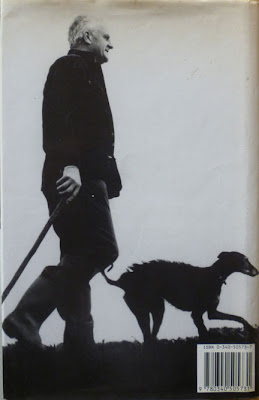 A UK hardback first edition of John le Carre's The Russia House, published by Hodder & Stoughton in 1989. Not exactly a scarce book, but it was cheap, and I'm on something of a Le Carre kick at the moment, having recently read both the fantastic Tinker Tailor Soldier Spy and The Honourable Schoolboy. (I was hoping to write about those this week, but I don't think I'll have time to do that now, and anyway I still have the third book in the Karla Trilogy, Smiley's People, to read. So instead I'll be spotlighting a couple of other decidedly scarce recent Le Carre acquisitions...). However, The Russia House is later Le Carre, which, as my friend Roly pointed out to me, is an altogether more thorny proposition. According to Roly, who kindly gave me permission to reprint his thoughts (slightly edited):

"All of le Carre's books are amazing (or at least very good) up to and including Smiley’s People. I would recommend you read the first three (Call for the Dead, A Murder of Quality, The Spy Who Came in from the Cold) in order – they’re less well known now, but among the best. Exception: The Naïve and Sentimental Lover, which is a now-disowned failed experiment in non-spy novels. (You might not know that such a thing exists?)"

"Then the later ones are OK (The Secret Pilgrim is very good) but the mode for the later work is very much:

1. Le Carre gets cross about something he reads in a John Pilger book, or Amnesty newsletter

2. He goes to Kenya/Panama/Georgia/Hamburg/etc. and hoovers up local colour

3. Plot: a conspiracy theory paranoia-thriller in which the bad guys are MI6 acting in cahoots with KGB and big business, and mobile phones can read your mind

5. Heroine: impossibly principled, daring, randy, beautiful social worker/crusading human rights lawyer/principled activist with a nice bum who shags him once (and once only)

6. Normally a couple of heroic locals fighting MI6/KGB/big business etc. from their mountain village in wherever-it-is

7. Good end up dead; bad end up dragging the bodies into the back of an unmarked van and driving off; mountain village burned to the ground by big business; the story is suppressed

8. Out in time for Christmas of even-numbered years

Rule of thumb: if it’s set in Germany or Surrey or London, it’s good and probably quite deep/moving. Otherwise, it’s a Romp."

Thanks Roly. Ever thought about starting a blog...?
Posted by Nick Jones (Louis XIV, the Sun King) at 04:03