Meyer Levin, Compulsion, Rope and Leopold and Loeb: the Films, the First Edition (Frederick Muller, 1957) and the Big Book Look

Next in this short run of posts on books which begat well-known films, a British first edition of a novel I picked up in the seaside town of Newhaven, just down the river Ouse from Lewes (the East Sussex town where I live and work, lest we forget). Newhaven's town centre has, unfortunately, seen better days, with lots of boarded-up, empty shops. But there is a funny little junk shop-cum-bookshop on the parade, which I popped into on a recent speculative jaunt to the town, and emerged clutching two first editions – both of which, coincidentally, inspired famous films. Let's have a look at this one first: 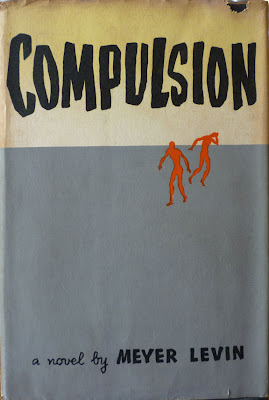 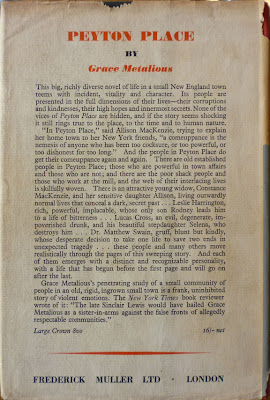 Meyer Levin's Compulsion was published in hardback by Frederick Muller in the UK in 1957 (originally published in the States in 1956 by Simon & Schuster). It's a fictionalised account of the 1924 Leopold-Loeb murder case, whereby Nathan Leopold and Richard Loeb killed fourteen-year-old Bobby Franks, motivated by a desire to commit the perfect crime. Levin's novel is split into two halves: Book One is titled "The Crime of the Century", and Book Two is titled "The Trial of the Century" (the case was one of the first to be dubbed thus in the US). In his Foreword, Levin states that he wrote the novel "not... for the sake of sensation", but "in the hope of applying to [the case] the increase of understanding of such crimes that has come, during these years, and in the hope of drawing from it some further increase in our comprehension of human behaviour."

Compulsion was turned into a film by director Richard Fleischer in 1959, starring Orson Welles, Dean Stockwell and Bradford Dillman... but it was preceded by a perhaps more famous movie – based on the same case – in 1948: Alfred Hitchcock's Rope. Which just happens to be one of my favourite Hitchcock films. Indeed, it's one of the flicks we included in the book 500 Essential Cult Movies, which I oversaw in my Ilex managing editor role, and which, all being well, I'll be writing about on the Ilex blog later this week. 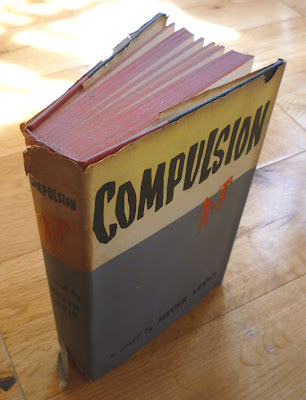 Anyway, the dustjacket on this copy of Compulsion is, as you can see, a little tatty, but even so, UK first editions of the novel – and first printings, which this one is – aren't terribly common; AbeBooks has only five listed from UK sellers and fourteen in total, most of which are either later printingss or missing their jackets. The jacket design isn't credited on the flaps: 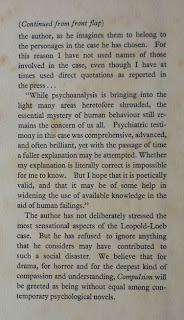 But, quite by chance, I do happen to know who created it, having blogged about this person before. It was designed by Paul Bacon, who's particularly famed for his jazz album sleeve designs, and who I covered fairly extensively in this post and this post. Bacon, you might recall, was the designer credited with originating the "big book look", whereby type is featured very large on a cover and any images quite small – and Compulsion is widely regarded as the first example of this design style. So the novel is notable in ways beyond just its movie ties and the Leopold/Loeb case.

So, just one more post to come in this short run – and the next book I'll be looking at – in a British first edition, with a very rarely seen dustjacket – is a powerful piece of fiction which inspired two equally powerful movies...
Posted by Nick Jones (Louis XIV, the Sun King) at 06:04