From the Lewes Book Fair: Voodoo, Ltd. by Ross Thomas

As mentioned in the previous post, Espionage Week – which this really will be the final tenuous instalment of (cue ecstatic cheering) as, quite apart from anything else, all this blogging is keeping me from actually reading some of these bleedin' books – has taken an unexpected turn, due to a couple of the books I bagged at the Lewes Book Fair. What I intended to be blogging about this weekend, if indeed I did do any blogging (which, evidently, I did do... have done... whatever), was an author I blogged about on Thursday – Ross Thomas. But as luck would have it, one of the books I bought at the Book Fair was by... and the title of this post might be a clue here...  Ross Thomas. So instead of blogging about a Ross Thomas book, I find myself blogging about... a Ross Thomas book. Just not the one I thought I'd be blogging about.

Y'know, this could turn out to be the most annoying post I've ever written. Which really would be saying something.

Anyway, the Ross Thomas book I got at the Book Fair was this: 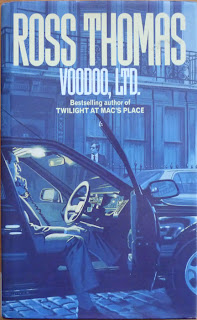 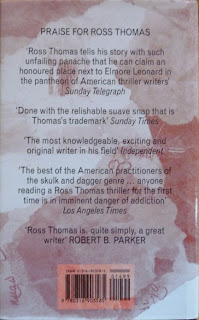 That's the UK hardback first edition of Voodoo, Ltd., published by Little, Brown and Company in 1993 – originally published in the States by Mysterious Press in 1992. The dustjacket illustrator isn't credited in the book – there's a signature at the bottom of the artwork that could be "Milliner" – but for reasons I'll go into at some unspecified point in the future I do know the patterns on the back cover were created by one Elaine Cox.

Now, in that Ross Thomas post on Thursday, I alluded to one of the two series that Thomas wrote during his career. And if I'd ended up blogging about the Ross Thomas book I thought I'd be blogging about (yep, getting reeeaaaally annoying now), I'd be discussing that series now. But Voodoo Ltd. isn't in that series. It's in the other series, the one starring private investigators Artie Wu and Quincy Durant. In fact it's the third book in that series, following Chinaman's Chance and Out on the Rim – neither of which I have. But seeing as this rather fine copy of Voodoo Ltd. was only two quid, and therefore irresistible, it looks like I'll now be collecting this series of Ross Thomas books too; even though I haven't even started blogging about the other series – the one I originally intended to blog about, and will still blog about, at some point.

It's official: the most annoying post ever. I'm going now.
Posted by Nick Jones (Louis XIV, the Sun King) at 13:10