When Jimmy Sangster died four years ago, his obituaries naturally concentrated largely on his film and TV work (see The Guardian, The Independent, The Telegraph and The New York Times). Sangster was a key figure in the revival of Hammer Films in the late 1950s and through the 1960s; he wrote The Curse of Frankenstein (1957), Dracula (1958), The Mummy (1959) and two dozen other Hammer horrors before moving to America, where he wrote for The Six Million Dollar Man, Kolchak: The Night Stalker, Ironside, Wonder Woman and a bunch more US TV shows. 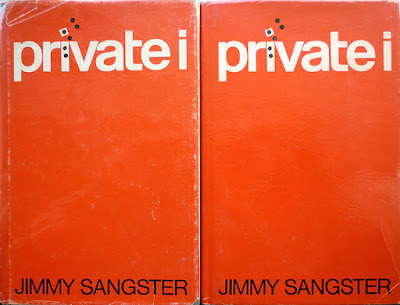 Or rather, these: private i, published by Triton in 1967, dust jacket design by Collis Clements. Now, I suppose the immediate question here is, why do I have two copies of the same book? Answer being, having learned about Sangster's parallel career as a writer of spy fiction (from screenwriter and novelist Stephen Gallagher, no less), I went in search of a first edition of his debut novel – private i – and came across two copies, both of which boasted intriguing inscriptions (written by Sangster, as far as I can determine; the handwriting is a little different in each book, but there are enough similarities – the same black maker pen used, corresponding letterforms – that I'm fairly confident they're from the same hand), one of which being an association copy. And since both books were relatively inexpensive – and being the hopeless case that I am – I bought both of them. (Whether or not I'll keep both of them remains to be seen – I'm planning on doing some eBaying soon.)

The copy on the left has a poem inscribed on the front free endpaper: 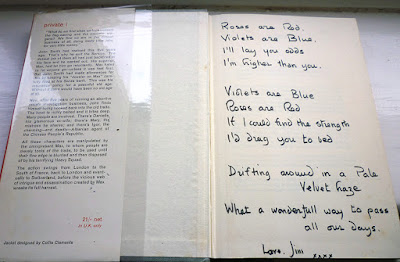 Roses are Red.
Violets are Blue.
I'll lay odds
I'm higher than you.

Drifting around in a Pale Velvet haze
What a wonderfull way to pass all our days.

I've no idea who the poem was written for (although I'd dearly love to find out), but I do know who the other copy of the book, the association copy, was inscribed to, this time on the title page: 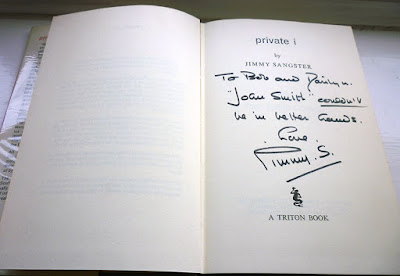 To Bob and Marilyn.

Bob and Marilyn are the American actor Robert Horton and his wife; Horton starred in Wagon Train from 1957–1962 and featured in numerous other television series, films and TV movies, one of which being the 1969 television film The Spy Killer, directed by Roy Ward Baker, produced by Jimmy Sangster and with a teleplay by Sangster based on his own novel... private i. 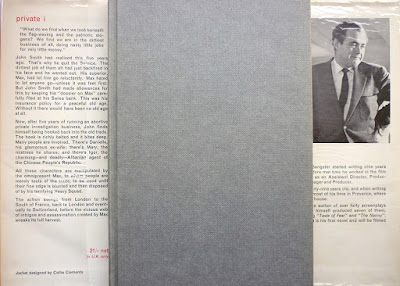 I've not seen The Spy Killer – although there is a clip on YouTube of the opening five minutes, featuring Horton as John Smith walking through Berwick Street Market to the baritone strains of what sounds like Scott Walker (although actually the rather less-well-known John Rowles), and the reviews on IMDB are positive – but I have read private i, and can report that it's a cracking piece of spy fiction – kind of early le Carré crossed with Len Deighton's unnamed working class secret agent and with a dash of Adam Hall's Quiller mixed in for good measure. Narrated by Smith, one-time operative with the Service – i.e. British Intelligence – turned down-at-heel private investigator, it starts out in a cut-price seedy gumshoe vein, with Smith employed by his ex-wife to obtain evidence of her new husband's gay affair, before taking a sharp left turn into the dangerous world of international espionage, as Smith is press-ganged back into service by his former boss, the ruthless and manipulative Max.

The plot is suitably murky and twisty, involving murder, coded secrets and both the Chinese and Russian security services, but it's Smith's sardonic narration which really lifts the thing. When three pages into a spy novel the lead states that he's "nearly two stone overweight, that my digestive system plays up constantly, that my teeth aren't particularly good, and that I have suffered periodically from halitosis, B.O., prickly heat and dandruff", you know you're not in the realm of Bond, and Smith spends the remainder of the novel boozing, leching, failing to get it up with his indifferent girlfriend and crashing around like the low rent – and yet, on occasion, lowly cunning – loser that he is. The only real downside is a regrettable streak of homophobia which runs through the narrative, but even that can be put down to Smith's boorish nature and the prevailing attitudes of the time rather than to whatever prejudices Sangster might or might not have held. And anyway, I can forgive a multitude of sins in any example of the spy fiction form which contains an irreverent passage like this one:

I poured myself a large drink, and read the evening paper. I washed up some dirty dishes and rinsed out a couple of pairs of socks. I washed a nylon shirt and hung it up to dry. I had another drink which I took with me to the bath. I trimmed my toenails, had a crap, read the evening paper again, and then had a shave. After that there seemed to be nothing left to do but to phone Berat's contact and tell him about the rendezvous. 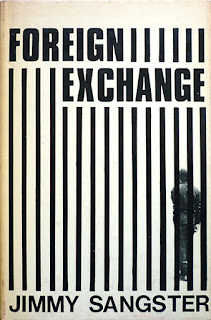 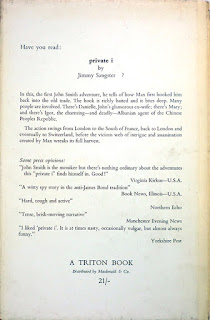 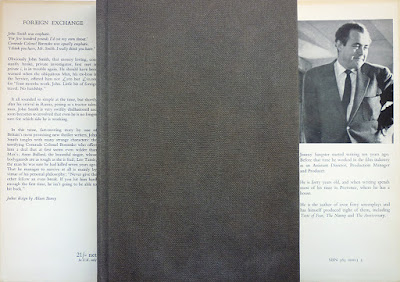 The second and final John Smith spy thriller, Foreign Exchange, was published by Triton in 1968 (and filmed for television in 1970, again with Robert Horton in the lead role), and it's almost as good as private i, sending Smith to Russia as part of a complicated Cold War spy swap plot. A full review will have to wait for another time, however; this post is quite long enough as it is. For now, I invite anyone interested in learning more about the novel – and in reading contemporaneous reviews of private i – to click on the above images of the dust jacket of the Triton edition (designed by Alison Storey).
Posted by Nick Jones (Louis XIV, the Sun King) at 08:10 6 comments: 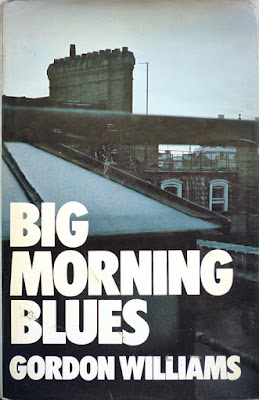 Big Morning Blues by Gordon Williams, published by Hodder & Stoughton in 1974, dust jacket design by Jeff Godwin, who I'm guessing is Jefferson Godwin, designer of the jacket for the 1973 Hodder edition of Brian Garfield's Death Wish; in any case, I've added Godwin's jacket for Big Morning Blues to British Thriller Book Cover Design of the 1970s and 1980s, even though the novel's not so much a thriller as an evocation of London's hard-drinking underworld, or "The Rookery", as the story has it (reviews here and here).

Williams is probably best known these days as the writer of The Siege of Trencher's Farm (1969), filmed by Sam Peckinpah in 1971 as Straw Dogs, but he has well over a dozen other novels to his credit, including The Man Who Had Power Over Women (1967), which was filmed in 1970, and four novels co-written with football manager Terry Venables, three of them a series (published by Macmillan from 1974–76 under Williams and Venables' joint pen name, P. B. Yuill) starring cockney private eye James Hazell which begat an ITV show, Hazell, in 1978. 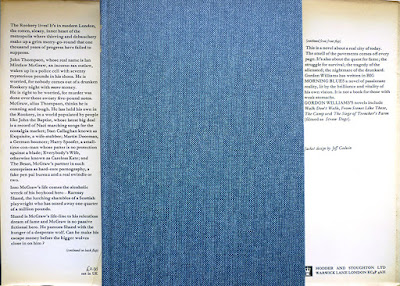 Evidently Williams imagined Big Morning Blues had telly potential too, because this copy of the book – which I acquired from book dealer Jamie Sturgeon – has the following inscription on the half-title page: 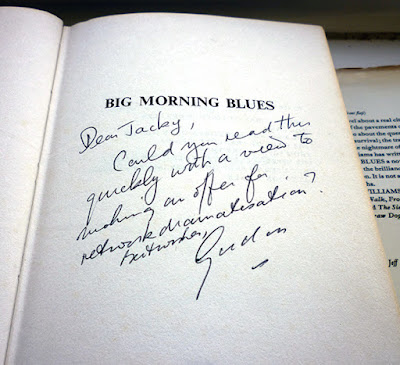 Could you read this quickly with a view to making an offer for network dramatisation?

I've not been able to work out who "Jacky" is – Williams's agent? A television producer? – but I don't believe the novel ever did make it onto the telly (at least not according to IMDB). Unlike the next inscribed book I'll be blogging about: a 1967 spy thriller by a writer who was instrumental in the rebirth of Hammer Films. 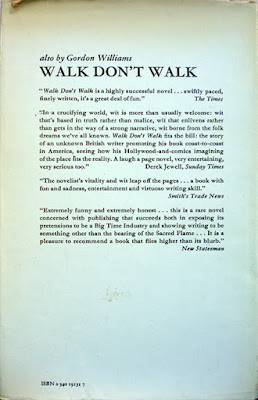