It's almost two years since we launched the DC Heroes & Villains Collection, the fortnightly graphic novel collection of which I'm editor and chief feature writer (and over three years since I started putting the whole thing together); which means that, this week, we've reached the 50th volume! And just in time for Christmas too, hence the 'Festive 50' in the title of this post – also an allusion, for those of a certain age and indie disposition, to John Peel's annual rundown of his listeners' favourite tracks of the year (the apogee of which, surely – and I invite no argument here – was when House of Love's blistering 'Destroy the Heart' topped the 1988 chart). 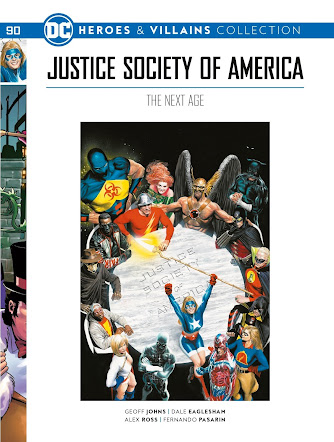 But anyway, as ever the continuing demands of the collection (I'm currently working on the 59th and 60th volumes, with an eye on the 61st and 62nd) plus other work (I'm also writing a book) mean that I don't have much time to blog, but I wanted to mark the occasion at least, and hail the hard work that's gone into the thing thus far – by myself, obviously, but also everyone at Hachette (plus Steve White, late of that parish, since gone on to more artistic endeavours) and designer Martin at Amazing15. As I've mentioned before, for me the DC Heroes & Villains Collection is a labour of love – a love letter, in a way, to the DC comics of the past 40 years or so... albeit a meandering and prolix one.

The 50th release (volume 90 in the correct numbering), Justice Society of America: The Next Age, may well be in some subscribers' hands already, but is officially published tomorrow, and as is now traditional with the DC Heroes & Villains Collection, it goes above and beyond the previously published DC edition of the same title, collecting not just the first four issues of the 2007 Justice Society of America series, but issues #7 and 8 as well (issues #5 and 6 will be in the Justice League of America crossover The Lightning Saga), plus the usual bonus material.

Merry Christmas, and here's to the next 50 volumes!