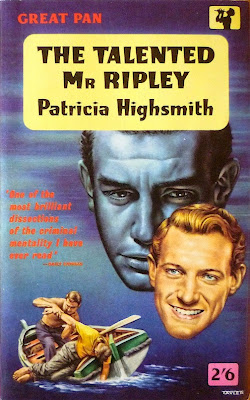 Having finally completed the Great Tom Ripley Reread (roughly seven months later than I figured I would, but hey, who's counting? Er, apart from me, evidently), I thought I'd take the opportunity to reflect on Patricia Highsmith's Ripley series as a whole, and revisit the Tom Ripley Quality Graph I proudly – perhaps foolishly, if the first comment on that post is anything to go by – unveiled back in 2011, with a view to seeing where each of the five Ripley novels now resides on it (innit). An absurdly self-indulgent and inconsequential exercise, I realise, but hey: when has that ever stopped me in the past?

First though, for any latecomers, in order of publication the five Tom Ripley novels are:

If you're so inclined, and if you haven't done so already, you can click on each title to read my prolix Ripley Reread piffle – or you can simply take my word for it that those five blog posts are some of the most insightful and critically incisive essays ever written about Highsmith's Ripliad and leave it at that. Ahem. In any case, the Reread was certainly instructive as regards my relative appreciation of each Ripley novel: of the five books, only one remained unchanged in my estimations, and that was mostly because I rate it so highly – unlike some of the other novels in the Ripliad, I'd actually read it at least twice, possibly three times, before this latest Reread – it couldn't really rise any further. Although I suppose it could have fallen... which is what happened to one of the other Ripley novels, as we shall see.

Here's what the Tom Ripley Quality Graph looked like in 2011 (actually, not quite: I've redrawn it – the original was a bit scruffy – although the data is the same): 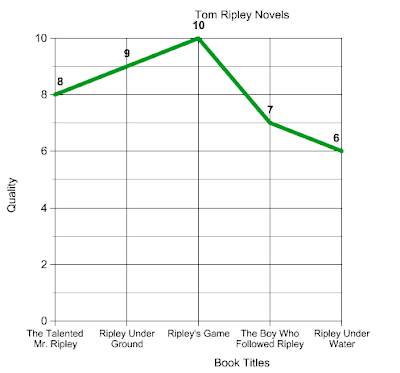 The Talented Mr. Ripley scored a very healthy 8 – it is, after all, the bedrock upon which the Ripliad is based – then the first sequel, Ripley Under Ground, scored an even healthier 9, and then the high water mark: Highsmith's masterpiece, Ripley's Game, with an unbeatable 10 – unbeatable, that is, if your graph only goes up to 10. Which mine does. Anyway, after that it's a steep decline to The Boy Who Followed Ripley on 7, and another drop to the final novel in the series, Ripley Under Water, on 6.

That was then. Now here's how things look in the wake of the Great Tom Ripley Reread: 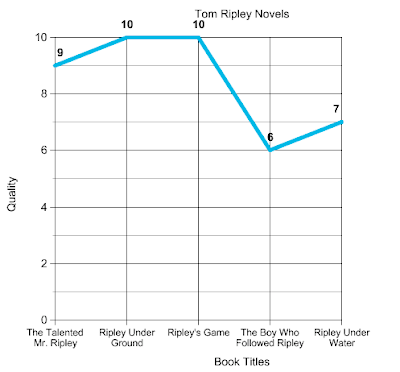 Just one book has remained where it was: Ripley's Game, the Ripley novel par excellence. Or so I once believed, because its lofty position is now paralleled by the preceding Ripley book, Ripley Under Ground, which on this second go-through, and in its own way, I found just as compelling as Game. Talented has also moved up one – for me, more so even than Highsmith's 1950 (non-Ripley) debut, Strangers on a Train (and certainly more so than 1954's The Blunderer), it's the first book where her abiding concerns of power, identity, obsession, deception and the nature of evil fully coalesced – whereas the fourth Ripley novel, The Boy Who Followed Ripley, has fallen one place; on this read I found it lacked the urgency of others in the series (although as an aside, I should note that such is my enthusiasm for Ripley that Highsmith could have written an entire novel consisting of Tom gardening, playing the harpsichord and sauntering down the road to George and Marie's bar-tabac and I'd probably have been perfectly happy). Finally, Ripley Under Water – a direct sequel to Under Ground – went up one; on reflection I feel it is a better book than Boy, although still not as good as the first three Ripley novels. 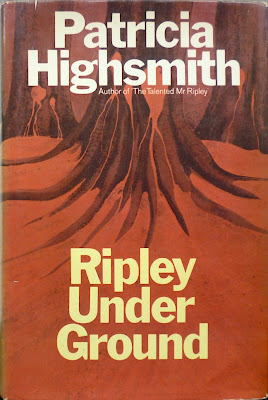 So there you have it. For further thoughts on each book in the series I'll direct you to each of my five individual posts on them – assuming you've read the books, that is; if you haven't, well: you know what to do next. Suffice it to say in closing that to my mind Highsmith's Ripliad is a remarkable achievement: a peerless extended study of a man who literally gets away with murder – who is, as he himself puts it (in Ripley Under Ground), "a font of evil" – and how such a man might live with himself and even, by his own cunning, intellect, force of will and sense of self-preservation, flourish.
Posted by Nick Jones (Louis XIV, the Sun King) at 07:30