Three from Le Carre: Call for the Dead, a Murder of Quality, and The Spy Who Came in from the Cold

As I might juuuuuuust possibly have mentioned before, I collect books – modern first edition hardbacks for the most part (with the occasional paperback thrown in there, not to mention comics and graphic novels). Despite appearances to the contrary, it's not actually a terribly expensive pursuit, at least not with the authors I collect; the majority of, say, Kingsley Amis, or Gavin Lyall, or even, to a lesser extent, Patricia Highsmith's body of work can be had in UK first edition for around a tenner a book if you know where to look, and there are a multitude of available avenues – eBay, Amazon, AbeBooks, bookshops (both online and bricks and mortar), book fairs, charity shops, and more besides. With a little work (or even using Bookfinder if you're a lazy sod), you can quickly compare prices and editions and get whatever you want. There are pitfalls, as I've outlined previously, but for the most part, the gains outweigh the losses.

But even with the authors I collect, there are still certain books that are, and probably always will be, out of my reach. I can't stretch to a first of Patricia Highsmith's The Talented Mr. Ripley, for example – UK or US (although my UK paperback first does me just fine): we're talking at the very least £500 for a UK first with a dustjacket, and more likely into the thousands. Ditto Amis' Lucky Jim. And now that I've embarked on yet another crazed collecting quest, there's a similar problem with John le Carre's early novels. Because while most of his works from The Looking-Glass War (1965) on can be had for an affordable price (let's not get into the limited edition first impressions of his more recent books, as that way lies madness), first editions of Call for the Dead (1961), A Murder of Quality (1962) and The Spy Who Came in from the Cold (1963) will set a body back hundreds, perhaps thousands of pounds.

On this matter, however, as on many other book collecting-related matters, I refuse to admit defeat, or see reason, or give in to good sense, or indeed confront the bruising reality of my mundane, soul-crushing, drab, humdrum existence. I will not let such seemingly insurmountable obstacles as a distinct lack of available funds, or for that matter such trifling concerns as continuing to feed and clothe myself (eating's overrated anyway, and as for clothes...) or keeping a roof over my head stand in the way of obtaining the books I want (need?). No indeed. Oh hell no.

So, to round off Espionage Week (possibly; I might still manage some weekend blogging, in which case Espionage Week may continue...), let's have a look at a pair of recently acquired Le Carre books that, while not quite true first editions of those first three novels, are as close as I'm likely to get, and quite uncommon in their own right. First up: 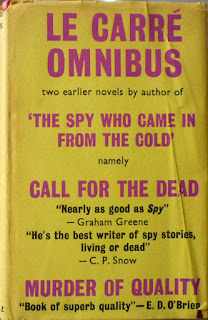 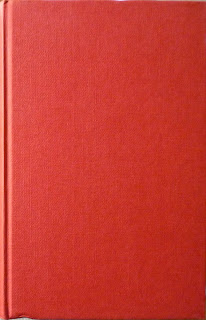 A UK hardback Omnibus of Le Carre's first two novels, published by Gollancz – who published all of the author's initial three books – in 1964. This, I have to say, was an absolute steal. I got it for a knock down price from a dealer on Amazon Marketplace who clearly didn't know what he had on his hands, i.e. the first omnibus edition of Call for the Dead and A Murder of Quality, and therefore a rather rare and valuable book. The dustjacket's a little knackered, as you can see (Gollancz jackets from around this period are notoriously fragile), but even so, this is the first impression of an edition that went through multiple printings: 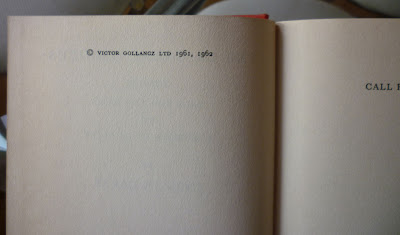 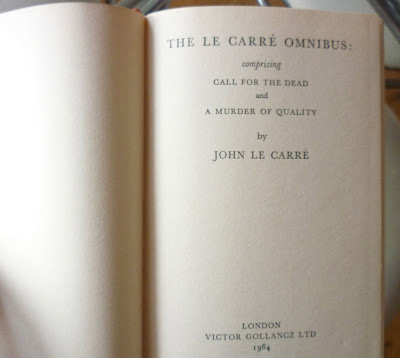 so even though the jacket's seen better days, it at least has a jacket, and not price-clipped either. The cheapest first edition/impression I've seen online (apart from this one, which obviously isn't online any more) is about a hundred quid. Bit of a find, in other words. Plus, it's Call for the Dead and A Murder of Quality, together in one edition, and I haven't read either novel. Result. But possibly not as much of a result as this: 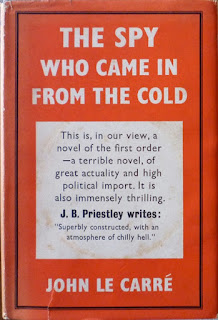 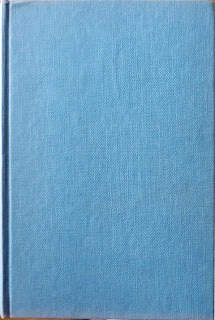 A 1963 UK first edition of The Spy Who Came in from the Cold, Le Carre's third novel. Now, those of you not suffering under the early onset of dementia (not sure if I include myself in that category) may be wondering at this point what's going on here. Didn't he state, you might be puzzling, just moments ago, in fact earlier in this very blog post, that a copy of this would set a person back many hundreds, perhaps thousands of pounds, and is therefore beyond his self-admitted meagre means? And you'd be correct. But appearances can be deceiving. Because although this is indeed a first edition, it's not a first impression: 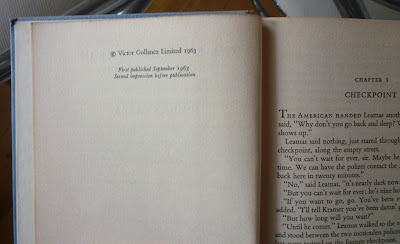 It's a second impression, although, as the indicia states, a "second impression before publication". In fact The Spy Who Came in from the Cold was so feverishly anticipated before it was published that it went through a grand total of four printings (impressions) before the publication date. Five months after publication it was up to its eleventh printing, and by July 1964 was up to its nineteenth impression. So while with almost any other book I wouldn't really be happy with a second printing, with this book, it'll do me just fine. First impressions go for at least £300, usually a lot more, but second impressions aren't listed for much less – around £200 (needless to say I didn't pay anything near that for this copy), and actually there are far, far fewer copies of the second impression for sale online than there are of the first.

Of course, at root, the whole question of a book being worth more or less because of the existence or otherwise of a few words stating "second impression" or "reprinted twice" or even "book club edition" (shudder) in or around the indicia is inherently silly... but that's just the way the book collecting world works. You either roll with it, or you don't collect first editions. There are, after all, plenty of other types of books to collect. Like paperbacks, for instance. Speaking of which, I've recently bagged some real doozies there – scarce paperback editions of books by a certain Donald E. Westlake. Only a matter of time before he cropped up again, eh? But those are posts for another day...
Posted by Nick Jones (Louis XIV, the Sun King) at 05:04