Ever since I established Existential Ennui's first permanent page, Beautiful British Book Jacket Design of the 1950s and 1960s, five years ago, the bulk of the dust jackets I've added to the gallery have wrapped books of a crime or spy fiction bent – those being the genres I've been most interested in, and accordingly have collected the most of, for most of those five years (and even before that). But right from the get-go I've included dust jackets from books from other genres (and indeed no genre at all) besides, notably science fiction. Among my earliest additions to the page was Roy Sanford's wrapper for the 1951 Rupert Hart-Davis first edition of Ray Bradbury's The Silver Locusts (alias The Martian Chronicles) – one of my most prized books – alongside John Rowland's jacket for the 1957 Heinemann edition of Nevil Shute's On the Beach and Donald Green's one for the 1959 Constable edition of Pat Frank's Alas, Babylon.

With my recently reignited fervour for SF, I thought it high time I added some more science fiction jackets to the gallery. Most of the SF I've been picking up over the past eight months or so has either hailed from the 1970s onwards or been paperbacks – or both – but I have acquired a handful of hardback firsts from the '50s and '60s as well, plus there are one or two other books I've had in my possession for longer than that which, for whatever reason, I haven't got round to adding to the page. Such as this one: 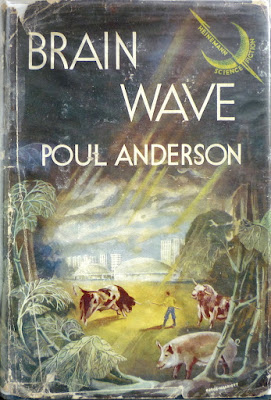 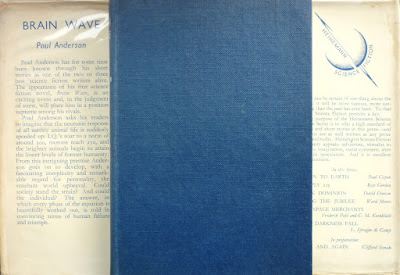 A British first edition of Poul Anderson's Brain Wave, published by Heinemann in 1955. This was one of the first books I bought when I moved down to Lewes from London nine years ago and got seriously into book collecting, acquired from Lewes' Bow Windows Bookshop for a tenner – on reflection something of a bargain, even given its damaged – but still complete – dust jacket; the cheapest comparable copy I can see online at present is listed for over £100. That jacket is by Eric Mudge-Marriott, whose work also appears on, among others, the 1954 Cassell edition of (John) Ross Macdonald's Experience with Evil (alias Meet Me at the Morgue), the 1955 Heinemann edition of David Duncan's Dark Dominion, and the 1965 Cassell edition of William Haggard's The Hard Sell (a copy of which I have in the loft somewhere). 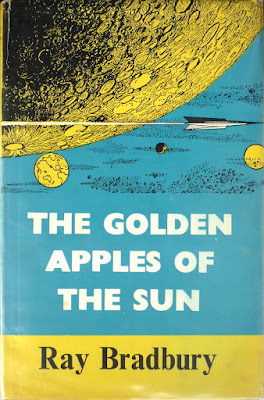 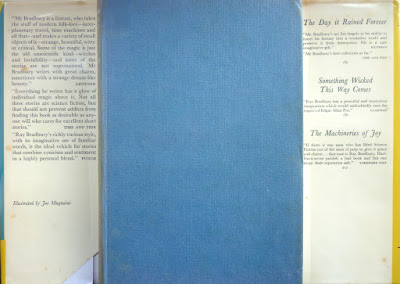 A more recent acquisition from Bow Windows is this British first edition/second impression of Ray Bradbury's early short story collection The Golden Apples of the Sun, published by Rupert Hart-Davis in 1953. Boasting among its tales an all-time Bradbury classic, "The Sound of Thunder", the book's dust jacket is by Bradbury's longtime artistic collaborator, American designer Joe Mugnaini, who also designed the differing jacket of the 1953 US Doubleday edition, as well as this: 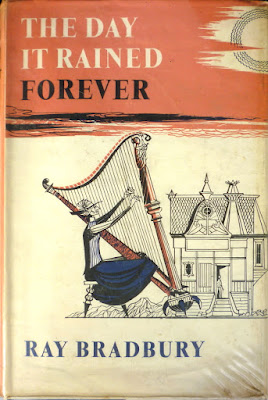 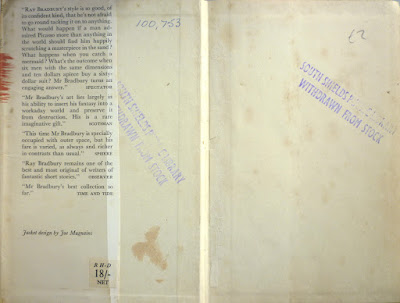 The 1959 Hart-Davis edition of The Day It Rained Forever, a 1962 second impression/ex-library copy of which I acquired for a couple of quid from Jamie Sturgeon at the last but one Lewes Book Fair. I bought a bunch of SF off Jamie at the most recent Lewes Book Fair in October too, including this: 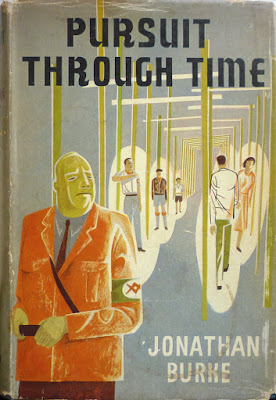 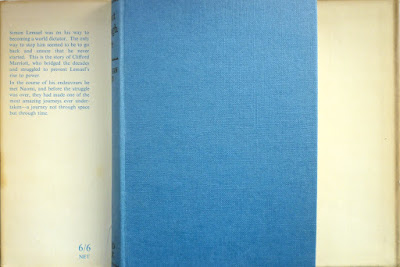 A first edition of Jonathan Burke's intriguing Pursuit Through Time, published by Ward, Lock in 1956. Sadly there's no art credit for the dust jacket (the style looks very familiar to me but I can't place it) so I've added it to Beautiful British Book Jacket Design of the 1950s and 1960s under 'Designer Unknown'. 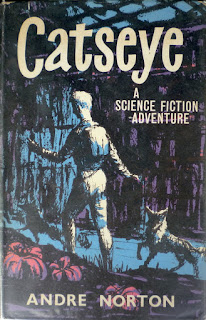 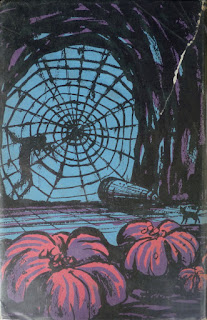 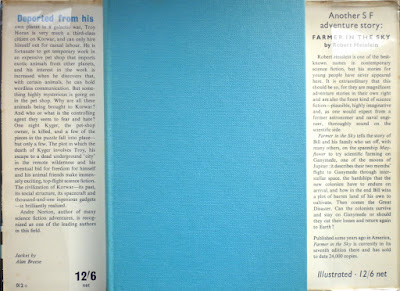 Also from the most recent Lewes Book Fair, from a different dealer, came this British first of Andre Norton's Catseye, published by Gollancz in 1962 (and once owned by a Prof. Spratt, according to the ex libris stamp on its endpaper). The wrapper is by Alan Breese, who created jackets for over a dozen Gollancz editions of Andre Norton books throughout the 1960s. 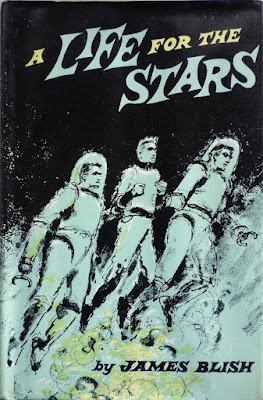 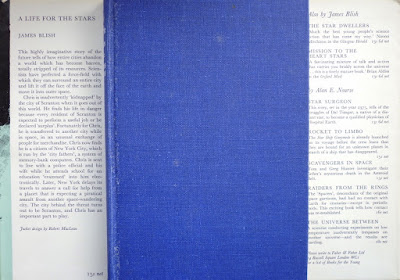 Lastly, from where I'm not quite sure – it's a recent-ish acquisition but I can't recall where from – a first edition/second impression of James Blish's A Life for the Stars, published by Faber in 1966 (originally 1964), dust jacket by Robert MacLean, who I believe was an American artist and children's book illustrator. Bizarrely, this is actually the second copy of the Faber edition I've owned; I did have a third impression but I've no idea what I did with it, hence why I bought this second impression from... somewhere... that and the fact that I also own Faber first/seconds of the other three novels in Blish's Cities in Flight sequence (which have rather different dust jacket designs). Anyway, I've added this and all the other SF wrappers in this post to Beautiful British Book Jacket Design of the 1950s and 1960s under their relevant designers (where known), all of whom are new to the gallery.
Posted by Nick Jones (Louis XIV, the Sun King) at 11:30