Today's Richard Stark delivery (or rather yesterday's; the postie tried to deliver it yesterday but I was at work, so I had to go pick it up this morning) was this: 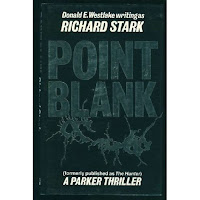 The 1984 Allison & Busby UK first edition hardback of Point Blank (a.k.a. The Hunter). A novel which, regular readers might recall, I already own in this edition:

The 1967 Coronet paperback. Is that a bit weird? Buying a book twice? I mean, the A&B edition's really nice, with its silver title and bullet holes, and my copy is a particularly good one, getting on for near-fine I'd say (excellent condition dustjacket, cream pages)... but even so. I now own two editions of the same book. Well, three editions if you count my signed bookplate edition of Darwyn Cooke's graphic novel adaptation of The Hunter:

Anyway. I've started reading the second Parker novel now, The Steel Hit (I'm reading the seventies Coronet paperback edition; its original title is The Man with the Getaway Face), and it's promising thus far. Although I can see the heist going wrong already...
Posted by Nick Jones (Louis XIV, the Sun King) at 04:55