Anyone with even half an eye on events at this past weekend's San Diego Comic-Con 2019 can't have failed to notice the revelations about the forthcoming Patrick Stewart-starring Star Trek: Picard. The biggest surprise at the Hall H panel on the Saturday was the announcement that both Jeri Ryan – Star Trek: Voyager's Seven of Nine – and Jonathan Del Arco – Star Trek: The Next Generation's Hugh Borg – will be making appearances in the show (as will Brent Spiner, Jonathan Frakes and Marina Sirtis, as Data, Riker and Troi respectively). So it would be remiss of me not to point out that both Ryan and Del Arco are interviewed in the current Star Trek Magazine, issue #71 (#198 in the UK) – a Borg 30th anniversary special, still on sale now. 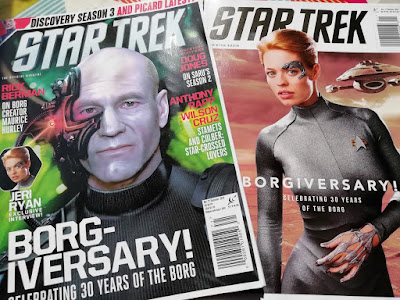 Clearly I was exhibiting some form of precognition when I commissioned those interviews... and Ryan wasn't exactly fibbing when, in answer to the question would she ever return as Seven, she replied, "Never say never." 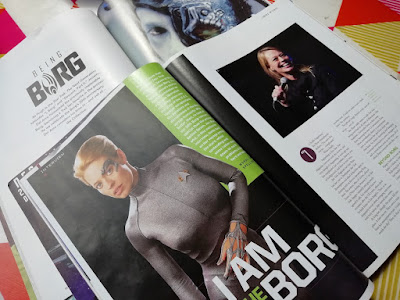 If you're interested in reading Ryan and Del Arco's thoughts on the Borg – or indeed former Star Trek executive producer Rick Berman's reminiscences about Borg creator Maurice Hurley (among many other Borg- and non-Borg-related Trek matters) – Star Trek Magazine #71 is available at newsagents, in specialist sci-fi and comic stores, or direct from Titan Magazines.
Posted by Nick Jones (Louis XIV, the Sun King) at 06:35