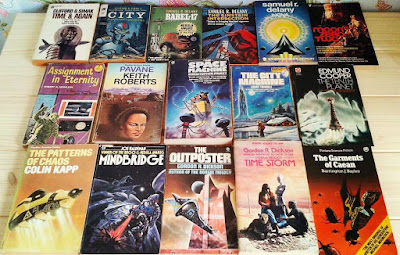 It's all The Forever War's fault.

Actually, way back when the Earth was young (or at least it sometimes feels that far back), it's probably fairer to say it was the fault of Doctor Who novelisations and Ray Bradbury collections and Glenn Chandler's short story "Bobo's Star" (an alarming tale with a mind-blowingly bleak ending which properly shat me up when I read it in the 1979 anthology Space 5, alongside Bradbury's equally unnerving "A Sound of Thunder"), all of which got me hooked on science fiction as a kid (most of those books borrowed from Beckenham Library). But in the here(ish) and now(ish) it was reading Joe Haldeman's 1974 novel that got me back into science fiction in a major way.

Not that I'd completely stopped reading (and collecting) SF, although in recent years my forays into the genre have either been at the more dystopian end of the scale – J. G. Ballard's High-Rise, Emily St. John Mandell's Station Eleven and Justin Cronin's The City of Mirrors spring to mind – or taken the form of comics like Jonathan Hickman and Nick Dragotta's East of West or Gabriel Hardman and Corinna Bechko's Invisible Republic. It was more that, for the most part, SF had taken a back seat to crime fiction, spy fiction and, increasingly over the last year or so, comics and graphic novels (constant companions, but ones that have been diverting more of my attention in recent years). 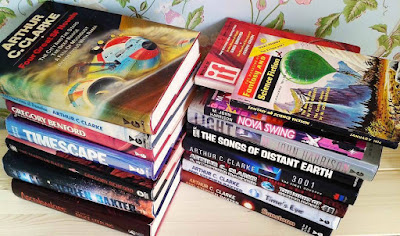 Then in March of this year I bought a British first edition of The Forever War at the Lewes Book Fair, and read it, and loved it, and found that I'd rediscovered my fervour for SF. I set about looking for books similar to The Forever War, a quest which led me to the kind of contemporary hard (well 'ard mate) SF that has its roots in the work of Arthur C. Clarke (a writer I was already more than familiar with) and the new form of space opera that came to prominence from the late 1970s. In charity shops and secondhand bookshops in Lewes and Brighton and Chichester and Eastbourne I turned up a stack of science fiction first (and other) editions (notably a ten-book haul from Camilla's in Eastbourne, ferretted out from that shop's precarious multi-layered piles) by Alastair Reynolds, Gregory Benford, Bruce Sterling, M. John Harrison, Stephen Baxter and Clarke himself, while explorations online turned up key works by Reynolds, Benford, Paul J. McAuley and John Varley. 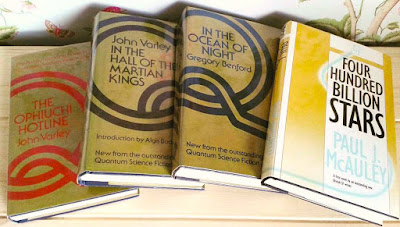 My guide through all of this, often as not, has been the afterword in Alastair Reynolds' collection of short stories Galactic North (a first edition of which I found in Brighton's Oxfam Books), which details the inspiration for the Revelation Space universe stories Galactic North is a part of – a future history I'll be further investigating (I snagged a scarce hardback first edition of Revelation Space itself online for less than a tenner – an absolute steal) alongside Reynolds' other work (I've already read his recent novella Slow Bullets, his 2016 novel Revenger and his and Stephen Baxter's The Medusa Chronicles – all three in signed first editions). 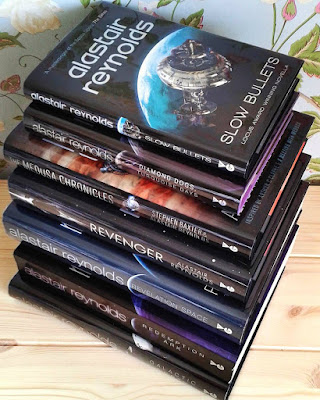 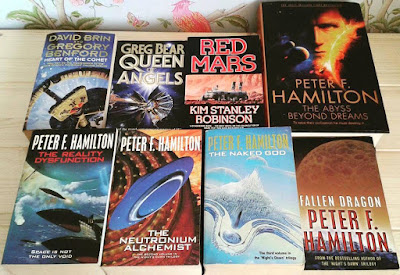 Add to those another stack of more modern space opera by David Brin, Greg Bear, Kim Stanley Robinson and Peter F. Hamilton, acquired at the most recent Lewes Book Fair, plus a couple more Hamiltons bought from Brighton's Savery Books, and it seems I have quite a bit of reading ahead of me, about which I'm quite excited. Which is good because, to be frank, prior to reading The Forever War I'd pretty much lost all enthusiasm for prose fiction; I think I only managed to read six novels last year – and most of those in the first month or two – and this year was looking like it was heading in a similar direction until Haldeman, Harrison (whose Light – a 2002 first edition of which I bought ages ago – I also recently read and loved), Reynolds and the rest hoved into view. So hooray for them, and for space opera, and for science fiction... and for me too. My 2017 SF odyssey... continues.