Our next signed book was actually a Christmas present from the lovely Rachel, who managed to arrange its delivery ahead of the day itself even though, in my usual indecisive manner, I'd only told her what I wanted a week beforehand: 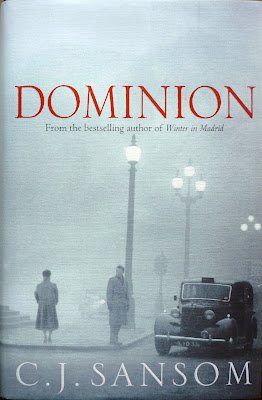 It's a British first edition/first impression of C. J. Sansom's Dominion, published in hardback by Mantle/Pan Macmillan at the tail end of 2012. Or rather, to be more accurate, it's the limited, signed edition: 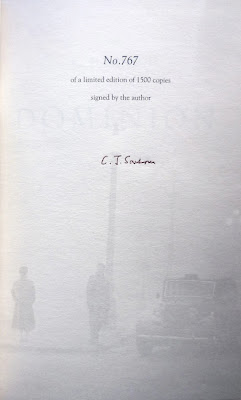 I started seeing reviews of the book at the beginning of December and was immediately intrigued; I've long been fascinated by alternate history stories, especially those which posit what would have happened if the Nazis had won the Second World War – see Len Deighton's SS-GB, Robert Harris's Fatherland (which Sansom acknowledges a debt to in a Bibliographical Note at the back of Dominion), and even Sarban's The Sound of His Horn. Dominion is set in Britain in 1952, twelve years after, in Sansom's timeline, this country signed a Peace Treaty – surrendered, to all intents and purposes – with Hitler's Germany. Unsurprisingly, it's a grim place: at the behest of the Nazis the indigenous Jewish population is finally being rounded up, and the prime minister, Lord Halifax, heads a coalition government that's little more than a puppet administration. Winston Churchill, now in his late-seventies, commands the Resistance, for whom civil servant David Fitzgerald is spying when he's tasked with a mission to assist an old friend, Frank Muncaster, who's been imprisoned in a mental hospital, and who holds a terrifying secret that the Germans would be only too pleased to obtain. 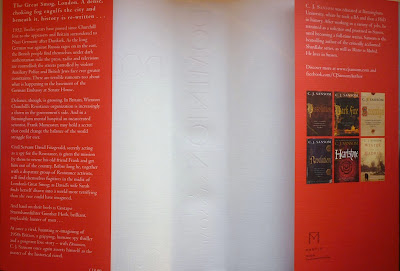 It's a deliberately paced affair; not having read any of Sansom's historical novels (he's perhaps best known for the sixteenth century-set Shardlake series) I don't know if the measured pace of Dominion is a symptom of the 1950s setting or simply the manner in which he writes, but either way, although it's a compelling read, and evidently heavily researched, I found it a tad starchy in places. That said, there's some ingenious use of London locations – Senate House as SS HQ, for example – and some decent character work; not so much David, who's a bit bland, but certainly poor, troubled Frank with his nervous "monkey grin", and, on the opposite team, the idealogically determined but war-weary Sturmbannführer Gunther Hoth (echoes there of Standartenführer Oskar Huth from SS-GB). And it's an admirable endeavour overall; there've been grumblings in the right-wing press over the treatment of some of the real historical figures, notably Enoch Powell, but Sansom's suppositions about which politicians would have kowtowed to Hitler struck me – with my admittedly meagre knowledge of history – as being plausible. 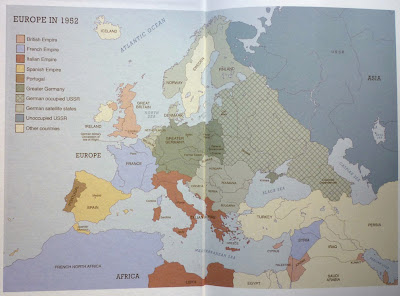 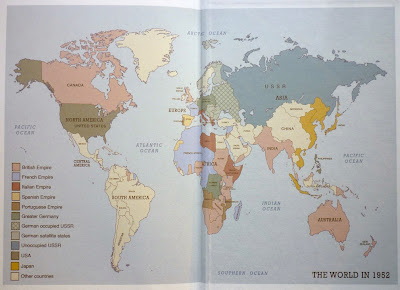 Sansom's aim in writing the novel, however, wasn't to stir up controversy over which public figures might, under different circumstances, have been collaborators. As he reveals in the Historical Note at the back of the book, he had a particular target in mind: nationalism – which he identifies as being on the rise again in Europe – and especially the Scottish National Party, to whom he delivers a well-aimed kick to the cobblers. He writes:

If this book can persuade even one person of the dangers of nationalist politics in Scotland as in the rest of Europe, and to vote 'no' in the referendum on Scottish independence, it will have made the whole labour worthwhile. The recent record of other parties in Scotland has not been good; that is never a reason to vote for something worse, and to do so irrevocably; and a party which is often referred to by its members, as the SNP is, as the 'National Movement' should send a chill down the spine of anyone who remembers what those words have so often meant in Europe.

It's an impassioned polemic, penned with an urgency that's occasionally lacking in the preceding novel, and almost worth the price of admission by itself. 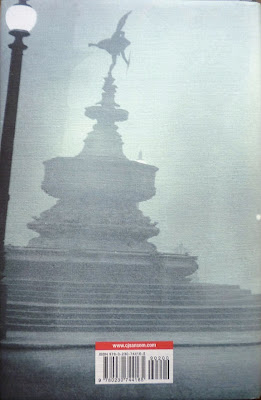