For the final Westlake Score from the 2012 London Paperback & Pulp Bookfair – although not, it almost (but not quite) goes without saying, and doubtless to the immense regret of all concerned, the final Westlake Score overall – here's a book which I showcased as part of a post in 2011 on perhaps the three scarcest, most collectible editions of any of Donald E. Westlake's written-as-Richard-Stark Parker crime novels... 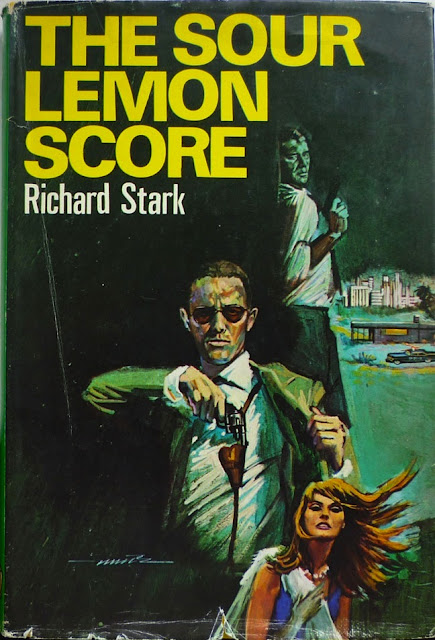 Published by Gold Lion in the UK in 1973, this is the first hardback edition of the twelfth Parker novel, The Sour Lemon Score, originally published in paperback in 1969 by Gold Medal (no relation) in the US and Coronet in the UK. As I explained in that 2011 post – the cover images for which I borrowed from a friend of famed book dealer Jamie Sturgeon – for the most part, the initial twelve Parker novels, all of which were first published as paperback originals, didn't make it into hardback until the 1980s, when Allison & Busby in the UK picked up the rights (Parkers #13–16, i.e. Deadly Edge to Butcher's Moon, were published straight to hardcover by Random House in the States, and all of the Parkers from the second run – Comeback, Parker #17, onwards – were also published initially in hardcover). There were, however, three exceptions: The Split (alias The Seventh), The Green Eagle Score and The Sour Lemon Score, all of which Gold Lion issued in 1973 as hardcovers. 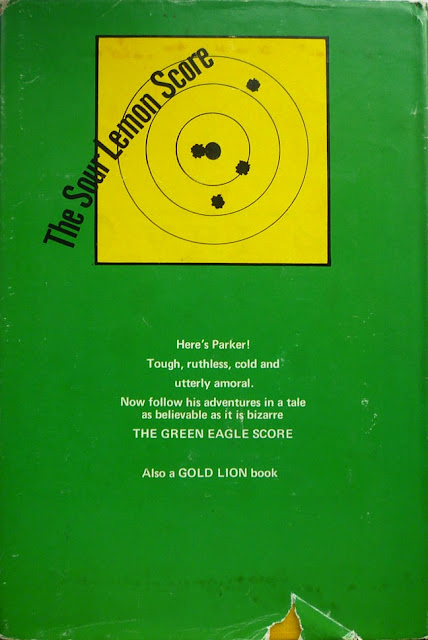 All three are very scarce and consequently highly sought-after by collectors, especially the latter two, which boast not-bad-at-all illustrated dust jackets (The Split has a photographic jacket). And to my mind The Sour Lemon Score is the best of the lot – which is why I got quite excited when Jamie Sturgeon dropped me a line to tell me he'd found a copy (in Australia, no less), and would bring it along to the Paperback & Pulp Bookfair for me. This being Jamie, his asking price was disgustingly reasonable (the cheapest copy available online at present is listed at £100, and Jamie wanted a hell of a lot less than that), even given that it's ex-library copy, although the only evidence of that is a few stamps; otherwise it's in pretty good nick. 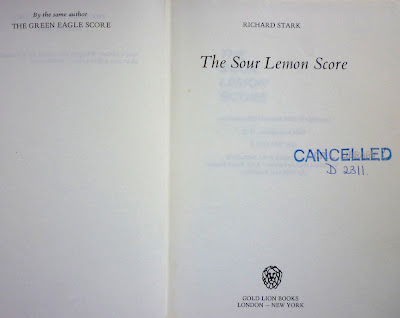 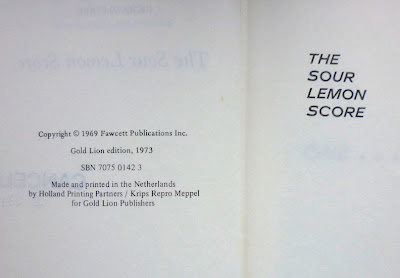 The Sour Lemon Score is widely – and rightly – regarded as one of the greatest Parker novels, but for me the interesting thing about it is that it's one half of one of those curious miniseries-within-a-series Parker pairs, like Slayground and Butcher's Moon, or, from the second run of Parkers, Nobody Runs Forever and Dirty Money. There are threads left dangling at the end of The Sour Lemon Score that aren't resolved until the next-Parker-but-one, Plunder Squad; it's an odd, notable characteristic of the Parker series that Westlake/Stark would occasionally pen these direct sequels, and yet write a largely unrelated instalment in-between: Deadly Edge sandwiched between The Sour Lemon Score and Plunder Squad; Plunder Squad nestling between Slayground and Butcher's Moon. I guess it's all part of the intertextual (and metatextual) games Westlake liked to play, not only within his own novels but also with his friends'; witness the crossover between Plunder Squad and Joe Gores's Dead Skip, for instance. In any case, I'm a big, big fan of Plunder Squad – it's one of my personal favourites of the Parkers – so it's nice to own both the first hardback edition of that and now of The Sour Lemon Score as well.

Of course, the corollary of now owning the Gold Lion edition of The Sour Lemon Score is that I should, by all rights, sell my copy of the 1986 Allison & Busby hardback... except that that would leave a gaping hole in the collection, a state of affairs which is too disturbing even to contemplate... 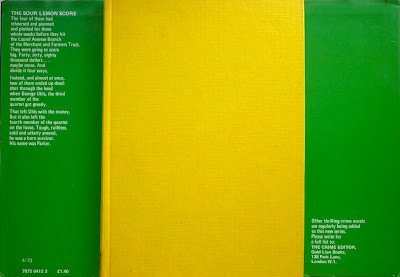 As is standard with Gold Lion hardbacks, there's no dust jacket design credit on the jacket flaps; there's a signature on the artwork itself, but it's indecipherable. It looks to me, however, as if it may well be the same chap who illustrated not only the wrapper of the Gold Lion edition of The Green Eagle Score, but the next book I'll be blogging about. Because you see, The Sour Lemon Score isn't the only Gold Lion hardback I've acquired from Jamie Sturgeon of late...