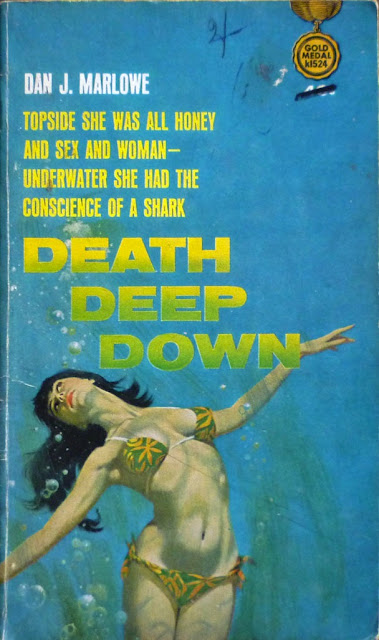 Ooh, look at this: two posts in one day. Crikey. Although this one's more of a link, really, prompted by Violent World of Parker supremo Trent, who drew my attention to an article at the Los Angeles Review of Books, which Trent tweeted about earlier (as did spy novelist Jeremy Duns; it was also linked by The Rap Sheet the other day). It's a great piece on hard-boiled crime writer Dan J. Marlowe – the subject, of course, of a recent run of Violent World of Parker and Existential Ennui posts – written by Marlowe aficionado and biographer Charles Kelly. Charles left a number of comments on this EE Dan Marlowe post and this TVWoP one, and currently has an essay about Marlowe in the back of the third issue of Ed Brubaker and Sean Phllips's comic book Fatale, but the Los Angeles Review of Books article – which is ostensibly about Marlowe's time in Hollywood – has some startling revelations in it, including the fact that many of Marlowe's novels were co-written with a US Air Force Colonel. It's well worth a few minutes of your time, so go give it a read, why don'cha. And I'll be back before too long with that promised competition...
Posted by Nick Jones (Louis XIV, the Sun King) at 11:57