Taking a slight detour from the irradiated wasteland that is my continuing series on post-apocalyptic fiction, let's have a look at a recent Westlake Score – or, more accurately, and as the title of this post suggests, Double Score. And I should probably apologise in advance for the essentially pointless nature of this post, but if nothing else it'll afford a glimpse into my diseased, obsessive psyche... 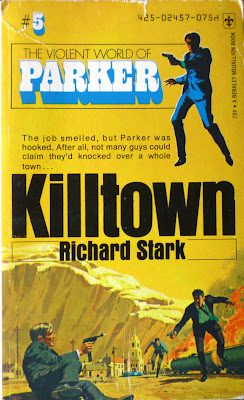 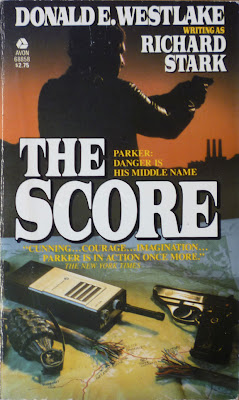 These two Donald E. "Richard Stark" Westlake books are, in fact, two different editions of the same novel, namely the fifth Parker outing, The Score, which was originally published in the States in 1964. Up top is the 1973 US Berkley Medallion paperback printing – retitled Killtown – and underneath it is the 1984 US Avon printing. They came from two separate eBay UK sellers who coincidentally listed them on the same day, in auctions that ended within an hour of each other. Naturally, inveterate – not to mention unhinged – collector that I am – and since American paperbacks of the Stark novels don't come up that often on eBay in this country – and despite my already owning an Allison & Busby hardback of The Score – I snapped 'em both up. But I did also have a (marginally) saner ulterior motive for bidding on them. Well, one of them, anyway.

See, for a while now, I've been wondering who the cover artist was on the 1970s Berkley Medallion softcover editions of the Parker novels (from whence The Violent World of Parker website takes its name). There are no art credits either on the covers or in the interiors, and I've spent hours searching online for information to no avail. So when I saw the Berkley edition of Killtown on eBay, I figured I'd nab it and see if I could locate a signature on the artwork. Sadly, I was thwarted once again; there's what looks to be a partial signature on the bottom right edge of the artwork, but it's cut off. Violent World of Parker supremo Trent left a comment on the version of this post on the VWoP blog, offering a small clue: there are two initials on the Berkley paperback of Deadly Edge (Parker #13) – "LF". However, despite additional Googling on my part, I've still come up short.

Unexpectedly, the 1984 Avon edition of The Score turned out to be rather more intriguing. I'd never really examined the covers of the Avon editions too closely, figuring they were photographic and therefore of less interest to me than illustrated or painted covers (which I tend to prefer). But on closer inspection of the Avon softcover of The Score, I realised that it's only partly photographic: the top half is a photo, but the bottom half actually appears to be a very skilled, highly rendered, photorealistic painting, of the type seen on film posters or in advertising: 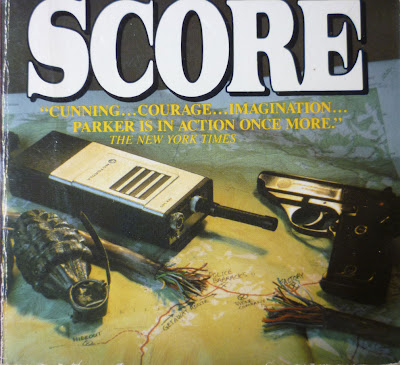 A handful of others of the Avon printings deploy this split-media technique too, including The Mourner, The Seventh and Slayground. However, as with Killtown, there's no cover credit inside The Score, and there's also no signature on the artwork. Which means the net result of my twin eBay scores is I now have two mysteries to solve instead of one. Brilliant. Really, then, this post is a plea more than anything: if anyone can identify the artists on either the Berkley or Avon editions of the Parker novels, please do leave a comment and put me out of my – now multiplied – misery.

And with that, let's return to the post-apocalyptic fiction, with a very obscure 1956 novel which I bought in a Lewes bookshop...
Posted by Nick Jones (Louis XIV, the Sun King) at 05:59