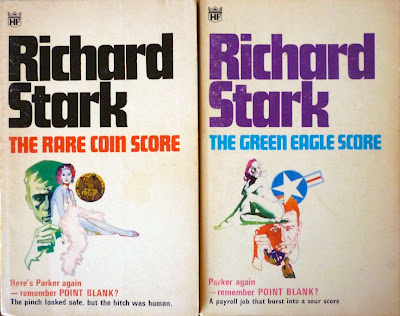 Earlier in the week, at the end of this post on the review slip in Jeffrey Goodman's copy of the 1967 Gold Medal edition of Donald "Richard Stark" Westlake's Point Blank!, I mentioned that seeing that review slip helped me make a connection that answered a question I'd been pondering for a while, and that as a consequence I'd be writing what would likely be a highly tedious follow-up post in which I would explain all. This, dear reader, is that post. I make no apologies for its pseudo-academic didactic nature, so if you have little interest in matters to do with publishing, skip to the end of the post for some pretty pictures.

Still with me? Well you've only got yourself to blame. As I was saying: I was struck by a realization whilst writing that second Point Blank! post, to do with Coronet, the British paperback publisher of the Parker novels in the late-1960s. See, in common with many of the outfits who've published Richard Stark's Parker books over the years, Coronet issued the novels out of sequence. Indeed, to my knowledge, the Parkers have only ever been published in the correct order twice: on their initial publication – although even there I've heard rumours about a couple of the books switching places due to a delay – and more recently when The University of Chicago Press acquired the rights. Every other time, each publisher – Berkley, Avon, Allison & Busby – managed to mix up the running order somehow, whether it be bringing forward a novel due to there being a movie adaptation (both Avon and Allison & Busby with Slayground) or seemingly through sheer incompetence (Berkley).

Coronet were no different. The British publisher started off well enough by issuing The Hunter, the debut Parker novel (original US publication 1962), in 1967, again retitled Point Blank! and with a still of Lee Marvin from John Boorman's movie of that year on the cover. But then, for their next Parker offering in 1968, Coronet skipped the subsequent eight Parkers and published instead the ninth novel, The Rare Coin Score (orig. US publication 1967), following that the same year with the tenth one, The Green Eagle Score (also orig. 1967 in the States). Parker #11, The Black Ice Score (orig. US 1968) was next in 1969, before Coronet jumped back to the seventh Parker, The Seventh (orig. US 1966), now retitled as The Split, and rounded off 1969 with the twelfth Parker, The Sour Lemon Score (orig. US 1969).

Coronet's treatment of Point Blank! and The Split are easy enough to understand: both sport movie stills on the cover and were issued to tie in with their respective film adaptations. But I could never quite work out why Coronet opted to publish Parkers #9–12 instead of, say, The Man with the Getaway Face (Parker #2, orig. US 1963), The Outfit (Parker #3, orig. US 1963), and so forth. Until, that is, I finally fixed on a word in the expanded version of the publishing house's name – a word that also appears in Gold Medal's full name: Fawcett.

Coronet, you see, was an imprint of Hodder Fawcett Ltd in the UK, while Gold Medal was an imprint of Fawcett Publications in the States. They were, in effect, the same publisher, and once you – or rather, I – realise that, then Coronet's publishing strategy becomes easier to comprehend: Fawcett Gold Medal acquired the rights to the Parker series in the States from Pocket Books as of The Rare Coin Score, which is why Hodder Fawcett Coronet followed suit with that book in the UK (after publishing Point Blank!, that is). I guess I should have made the connection earlier with all the blogging I've done on the Coronet editions of the Parkers, but as I said before, I've never been the sharpest tool in the box.

Anyway, so this post isn't a complete waste of everyone's time, I thought it might be instructive to compare the different approaches on the covers of the Fawcett US and UK paperback editions. The American covers were all illustrated by the great Robert McGinnis, but I'm still none the wiser as to who illustrated the UK ones (those that were illustrated, that is). I speculated here that it might be John M. Burns, but, as ever, if anyone reading this can shed light on the true identity of the cover artist on the British editions, you know what to do. The order of publication differed slightly from US to UK, so I'm going with what I think is the US order.