A Run of Rabes: War of the Dons by Peter Rabe (Fawcett/Gold Medal)

As trailed on Friday, over the course of the coming week Existential Ennui will be featuring a Run of Rabes: a series of posts on various books by cult American crime author Peter Rabe, to mark the publication this month of two previously unseen novels by him.

For many, Rabe is the ultimate pulp paperback scribe. From the mid-1950s until the early '70s he wrote a string of novels, the vast majority of them for Gold Medal, almost all of them published straight to paperback. Much like Donald Westlake, upon whom Rabe was a major influence, Rabe's stories deal with the dark underbelly of America and yet are surprisingly lithe and loose, nimble even. These aren't plodding detective novels or methodical whodunnits: his antiheroes are usually criminals, up against fellow criminals.

Rabe's prose style is slippery and agile, his intent sometimes opaque; the direction of his stories is rarely obvious. What motivates his characters isn't always readily apparent either, and that makes them unpredictable and therefore compelling. Horrible things are done to them and by them, but these events are often alluded to rather than described in detail: violent moments sketched out in a single line; assaults or rapes skirted round or left dangling, and all the more effective and shocking for it, with not a hint of titillation.

Until quite recently there wasn't an awful lot online about Rabe; he didn't even have much of a Wikipedia entry, although that's since been rectified, and now contains a good biography of him and a full bibliography. There's also a useful interview with Rabe here, conducted shortly before he died in 1990. I've written about Rabe before too, beginning with the first book of his I bagged, Blood on the Desert, back in May of last year, and then continuing with subsequent scores Journey into Terror, Dig My Grave Deep (the first in Rabe's loose series starring reluctant criminal Daniel Port), The Out is Death and Bring Me Another Corpse, The Cut of the Whip, and My Lovely Executioner. I also wrote a bit on how Daniel Port stacks up against Donald Westlake's character Parker (and I'll be returning to Port throughout the week). But we'll begin this latest Run of Rabes with one of his final novels: 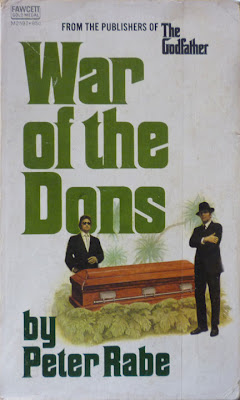 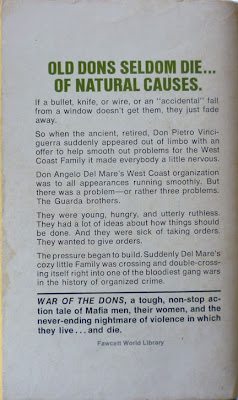 This is the US paperback first edition of War of the Dons, published by Fawcett/Gold Medal in August 1972. It's Rabe's penultimate novel under his own name; he only had one further book published as Peter Rabe after this, 1974's Black Mafia, although he did have a couple of tie-in novels to the TV show Mannix published in 1975. Clearly intended to capitalize on the success of Puzo's The Godfather (at least by Gold Medal), War of the Dons is a mafia tale which arose out of Rabe's interest in a particular New York gangland family, and features a trio of ruthless brothers. I got this from the same eBay seller as the next couple of books I'll be showing, all snapped up because here in the UK first editions of Rabes don't turn up too often on eBay. And if you're wondering who was responsible for the cover illustration, I'm afraid you'll have to carry on wondering: there's no credit, and no clue online. Darn. Hopefully I'll do better with the next book...
Posted by Nick Jones (Louis XIV, the Sun King) at 13:48