Three for Four: Agent in Place by Helen MacInnes, Let's Hear it for the Deaf Man by Ed McBain, and The Looking-Glass War by John Le Carré

So then, I know I stated I'd be blogging about new book acquisitions in the order they've been arriving, as I attempt to catch up with myself following my recent drift into the arena of the unwell, but I've changed my mind. I'm a mercurial beast like that. Instead, I've decided to leave the Westlake Scores (for there are many) and other Westlake/Stark business till next week, so you can expect another Westlake Week in just a few days' time. Unless I change my mind again – I've got other books to blog about too, plus I'd like to write something about Greg Rucka and Matthew Southworth's Stumptown comic book series, which has just completed its first arc – in which case, you, er, can't.

Either way, that's all in the future. For now, I thought I'd showcase a handfull of books purchased in an honest-to-god, bricks-and-mortar, proper, physical, actual, real bookshop, of all things. I often have a rummage in Lewes' various bookshops, and on the way home from the doctor's last week I popped into A & Y Cumming, up on the High Street near the castle. Like all of Lewes' second hand bookshops, their stock doesn't change that much, but they have a decent selection of reasonably priced modern firsts (among other things), and they're always worth a browse. On this visit, however, I discovered that their stock had suddenly gone from 'reasonably priced' to 'really rather cheap', and I ended up walking out with three first editions at four quid a pop (plus another four-quid first, Iris Murdoch's The Book and the Brotherhood, for Rachel). None of these books are particularly scarce or valuable, but even so, that's a real bargain.

First up, there was this: 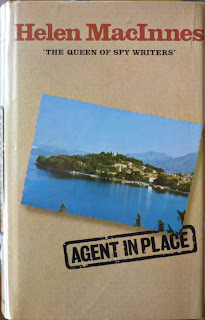 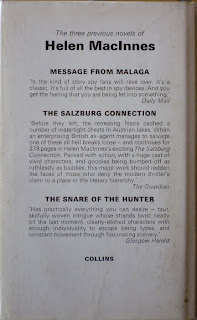 A UK William Collins 1976 hardback first edition hardback of Helen MacInnes' Agent in Place, dustjacket designed by Futura Arts. I was only dimly aware of MacInnes when I saw this on the bookshelf; dubbed variously 'the queen of spy writers' and 'the queen of international espionage fiction' (both rather cumbersome tags, and not a patch on, say, Grahame Greene's description of Patricia Highsmith as the "poet of apprehension") MacInnes wrote over twenty books from 1941 to 1984 (she died in 1985), many of which were very well regarded, mixing romance elements in with the thrills. Like a lot of thriller/espionage writers, she's increasingly overlooked, and a lot of her back catalogue – possibly all of it – has fallen out of print. This particular novel is about a Nato memorandum that's fallen into the wrong hands and subsequent efforts to minimise the damage. Sounds good to me. 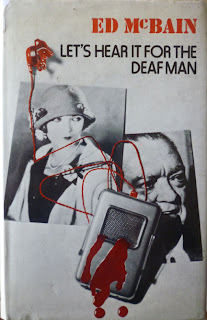 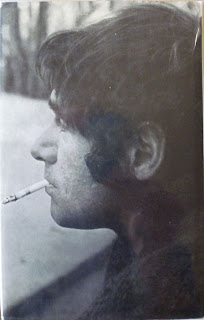 A UK Hamish Hamilton 1973 first edition hardback of Ed McBain's Let's Hear it for the Deaf Man, one of McBain/Hunter's umpteen 87th Precinct Mysteries, with a dustjacket designed by Colin Andrews and that rather cool author pic on the back by Richard A. Kenerson. This one features occasional recurring nemesis the Deaf Man, a criminal mastermind who first appeared in 1960's The Heckler and who has a habit of sending misleading clues to the detectives of the 87th Precinct. And in Let's Hear it for the Deaf Man, we the reader get to see those clues, which for the most part are pictures, too: 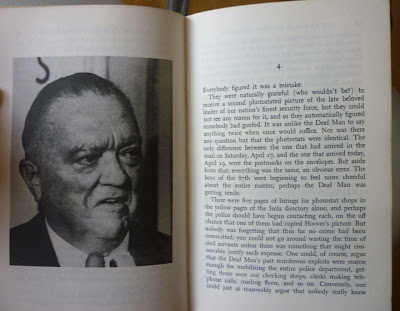 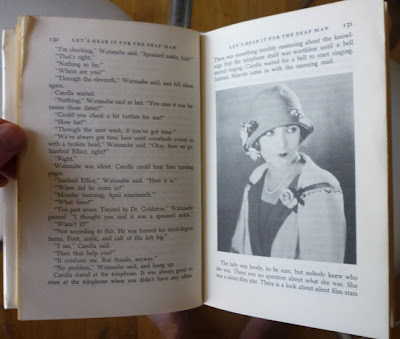 As I mentioned a month ago, I haven't read any McBain books yet, so this may well be my first experience of his work (at some point in the distant future, the way the books are piling up at the moment).

And finally, and the pick of the bunch: 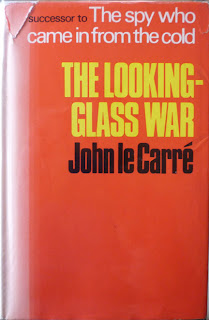 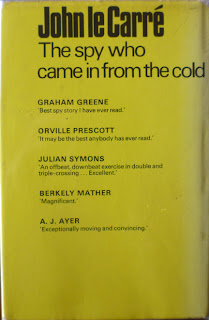 A UK Heinemann 1965 first edition hardback of John le Carré's The Looking-Glass War, his fourth novel following Call for the Dead (1961), A Murder of Quality (1962) and The Spy Who Came In from the Cold (1963). The dustjacket on this one's a bit battered, but the book itself is in very good condition, clean and un-foxed, and at four quid I can't really grumble too much. The only problem is, I'm now in two minds over whether to read this first or Tinker, Tailor, Soldier, Spy (1974), as both feature spymaster George Smiley (although to a much lesser degree in The Looking-Glass War). Hmm. Chewy one.
Posted by Nick Jones (Louis XIV, the Sun King) at 06:19