Next in Paperback Week – which, if you're just joining us, and as the overarching title 'Paperback Week' kind of implies, is essentially a week dedicated to paperback books – we move on to the books I picked up at the recent London Paperback and Pulp Fair. And we also move from one Ross... to another: 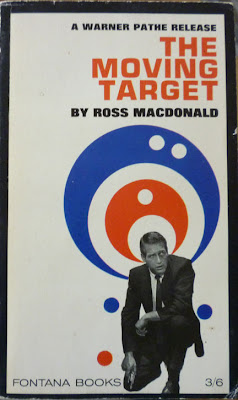 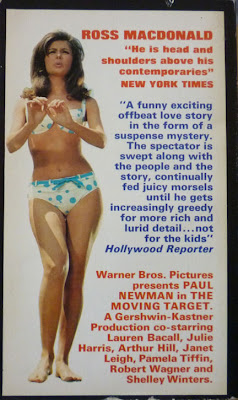 Namely Ross Macdonald (or Kenneth Millar, to give him his real name), and the 1966 first UK Fontana paperback edition of his debut novel, The Moving Target – originally published in the UK by Cassell in 1952 and in the US by Random House in 1949, under the name John Macdonald. So what's so special about this little paperback, I hear you cry? And perhaps more importantly, why on earth would I want to buy it when I already have a 1971 second impression Fontana paperback of the very same novel? As ever, those are both excellent, not to mention pertinent, questions. You people are on fire right now.

Really, it comes down to the scarcity of this edition – there are only a couple of copies of this '66 printing for sale online – and to that fab cover, which I suspect is the reason for its scarcity. Because it's the tie-in edition to the effortlessly wonderful William Goldman-written, Paul Newman-starring 1966 movie adaptation of the novel, Harper (or as it was called on its original UK cinema release... The Moving Target). I don't know if Harper is one of my favourite films ever, but it's certainly up there, and it does contain some of the greatest dialogue in cinema history, including one exchange that's always stuck in my head, where Pamela Tiffin's character (that's her on the back cover of the book) says to Paul Newman as P.I. Lew Harper (Lew Archer in Macdonald's book), "You probably still think a woman's place is in the home." To which Harper retorts, "Not in my home." And there are plenty more snarky lines where that came from.

As I mentioned there would be between some of the books I'm featuring this week, there's a thread connecting this particular edition of The Moving Target with the author of the first book in Paperback Week, Francis Clifford. Clifford's 1966 espionage novel The Naked Runner was turned into a critically ill-regarded (at least, back then) movie in 1967, starring Frank Sinatra. Sinatra needed a hit at the time, and The Naked Runner actually ended up doing pretty well at the box office by all accounts, perhaps due not only to Sinatra but to the solid job done by the director, Sidney J. Furie (who also made the brilliant The Ipcress File... the, er, less brilliant The Young Ones... the, um, even less brilliant Superman IV: The Quest for Peace... OK, let's stick with The Ipcress File). But Sinatra only agreed to star in the The Naked Runner because negotiations on another movie had broken down. That film? Harper.

There you go, y'see? Connecting threads. Hmm, I wonder what the connection to the next post might be...?
Posted by Nick Jones (Louis XIV, the Sun King) at 04:49